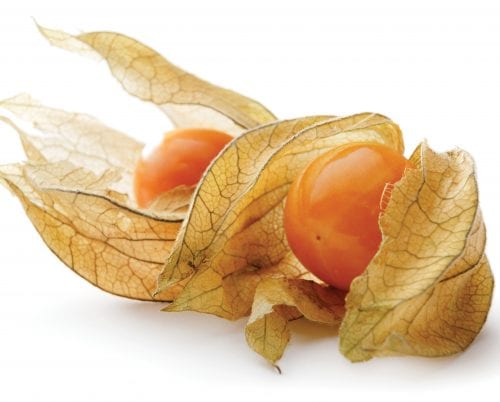 While this pale orange-yellow tart fruit has been shown to have lower antioxidant activity than its more vibrant red berry cousins, you’ll get 3g fibre in a half-cup serve as well as two-thirds of the amount of vitamin C that you’d get from an orange, which is pretty good. So, if we add cape gooseberries to our salads, the vitamin C in them will help us absorb the non-haem iron.

If you’re growing cape gooseberries, plant seeds any time from spring through to autumn and the fruit should be ready for harvest in about five months. Cape gooseberries grow on a sprawling, bushy plant and the fruit is wrapped in a thin, papery covering. Fruit will drop to the ground when ready to eat. Eat them raw or cooked and, if you can grow enough, cape gooseberries make a delicious preserve.

Coriander is common in New Zealand gardens and is a tasty addition to Asian and central and southern American cuisines. Use fresh coriander, referred to as cilantro in the United States, in curries and soups, or as a garnish.

The leaves, stalks and berries are edible. The berries are dried and called coriander seeds – popular in Asian cooking.

A quarter of a cup of chopped leaves will add loads of flavour for just 4kJ. While we’re unlikely to use enough coriander leaves in a dish for them to be an important source of any particular nutrients, they do contain a wide range of nutrients and antioxidant compounds that all add to our health.

Some people say coriander tastes like soap. A 2012 study by a US genetic testing company looked at the genes of 14,600 people, and those who confirmed a soapy taste from the herb had their DNA compared. The study results identified two genetic variants linked to how coriander is perceived.

Add fresh coriander to dishes just before serving, to keep the flavour.

Gai lan is also referred to as Chinese broccoli, Chinese kale or kailaan, and has a strong broccoli-like flavour. This vegetable is a good source of folate and will add fibre, riboflavin, vitamins C and K and iron. Gai lan also contains the antioxidants lutein and zeaxanthin, important for eye health and, as with other members of the brassica family, also contains glucosinolates which are thought to have anti-cancer effects.

To prepare gai lan, chop the leaves roughly and peel the stem, then cut into even-sized pieces. Stir-fry or steam to give dishes a flavour boost, or eat it raw.

Gai lan is available year-round from most supermarkets and from Asian grocers or specialty food stores. It is also easy to grow.