How to get the best from feijoas, defeat butterflies and not eat money 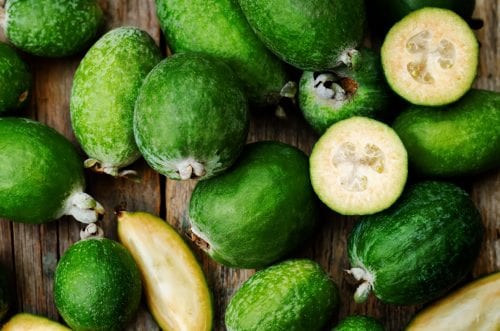 Now is the time to feel smug for planting winter green vegetables, as the prices are set to soar due to the flooding last month.  With lettuces at nearly $7 each at the supermarket, whenever I use a leaf or two in a sandwich or salad it feels like eating currency. Brassicas have reached luxury class too so I’ve been checking every day for white butterflies,  but I think I’m safe in finally taking the netting off them,  now  that hopefully all the cabbage whites have gone to butterfly hell.

We’ve had so much rain I’m tempted to try growing rice. We did have a week or so of Indian summer, to compensate for not getting a proper one.

It’s feijoa season and if you don’t have your own, lots of people are giving away their gluts. I love to simply eat them raw, but there are also recipes about for feijoa cakes or muffins , or chutneys, and even meat dishes, as well as desserts.  An easy dessert recipe is to put 1 cup of plain yoghurt in a blender, add 3 to 4 tablespoons of milk powder, the flesh of 3-4 feijoas, and 1-2 tablespoons of honey. Whirl it up and leave it to thicken in the fridge. Top with some chopped nuts.

Feijoas need to be left until they drop from the tree, or they will never develop full sweetness, but if you’re worried about bruising, pile some hay or lawn clippings under the tree. If you really must pick them, test them first by cupping the fruit in your hand and giving it a slight lift and turn. If it’s ready it will fall into your hand. Then the fruit needs to be kept inside until it is soft before you eat it.

From a photo published by the online Get Growing magazine, I think I’ve identified my cooking apple tree as a Peasgood Nonsuch. And it can be a dessert apple too! Which is a waste considering I’ve used it exclusively for cooking for the last 20 years. I tried eating one and it is quite sweet, although very large to eat in one sitting.  The tree has had a good crop this year, so there will be enough for all the apple recipes from apple sauce for pork to apple pie and my mother’s famous apple sponge.  And now it’s a dessert apple I can make it into baked apple too.

A lot of the grapes still haven’t fully ripened due to lack of sun and warmth, and it’s a race between whether they’ll ripen before they rot on the vine or whether I’ll have to pick and juice them. I still get a bunch or two each day.

While I was out in the garden I was brought up short by a waft of perfume – part spice, part vanilla, and realised that my wintersweet is flowering. The flowers aren’t very decorative, being small and waxy, creamy yellow with a maroon centre, but the perfume is heavenly.  You can’t say it’s food, but it nourishes the spirit.