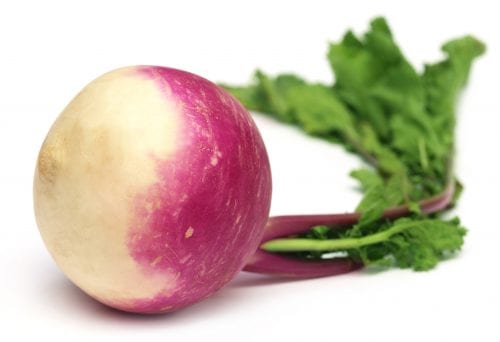 An average swede (around 100g) adds just 100kJ to your meal and provides 2.8g of fibre. Swedes (also known as rutabaga) are more commonly found in stores from autumn. They are very versatile and have a sweet, delicate flavour, but are a polarising vegetable. Boil, roast, steam or mash them, or add them to stews and curries.

Did you know? Swedes are rarely planted in Germany due to their reputation as a ‘famine food’. During World War I large parts of the population ate a diet consisting mostly of swedes, after potato and grain crops failed.

Also, there’s an annual International Rutabaga Curling Championship, which started at a New York farmers’ market in 1997 with vendors throwing their produce down the aisles.

Part of the brassica family, Brussels sprouts look like miniature cabbages and grow well in cooler temperatures. Ohakune, in the North Island, and Oamaru, in the South Island, are New Zealand’s main growing areas. They are available in plentiful supply from March through to November.

While not everyone has the fondest childhood memories of Brussels sprouts, cooked properly they can be delicious.

They are often boiled, microwaved or steamed, but you can make slaws, roast them, fry them, or add them to stir-fries.

Store them in a bag in the refrigerator until you’re ready to use them.

Did you know? Just six Brussels sprouts (around 90g) add over 4g of fibre.

Mandarins are thought to have originated in Southeast Asia and were first introduced in England in the early 1800s. They are a great source of vitamin C and add fibre and small amounts of other vitamins, minerals and healthy phytonutrients. Because of their sweet taste, small size and easy-peel varieties, they are often a hit with kids.  Eat as a snack or try in salads, desserts, baking, sauces and preserves.

Grow your own: Mandarin trees like fertile soil and good drainage.  The fruit is frost tender but the trees can be grown in pots, so you can move them to a sheltered spot when the weather cools.