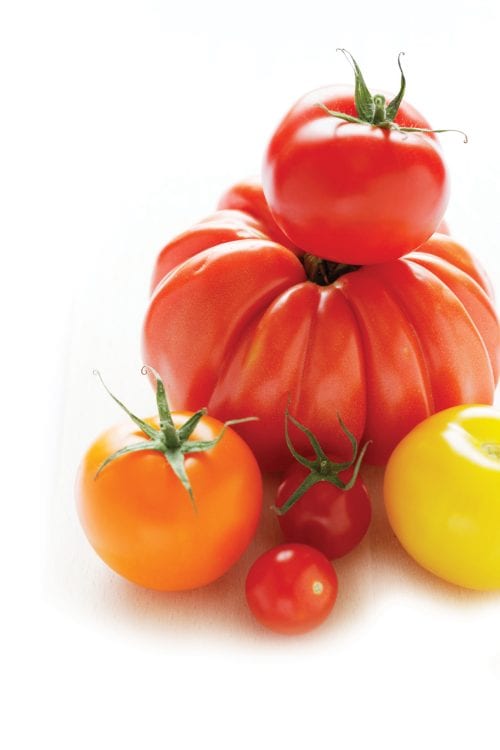 It wasn’t quite a case of Attack of the Killer Tomatoes, but once upon a time this vine-grown staple was a feared crop.

In the 18th century, many Europeans believed eating tomatoes was hazardous to their health and nicknamed it the ‘poison apple’. It turns out the tomato — which is botanically a fruit but used as a vegetable — was mistakenly given the lethal label when the real culprit was the plate it was served on. Wealthy Europeans used pewter tableware and acidic tomatoes leached lead from their plates. It was the lead, and not the tomato, that was killing them.

There are no such PR problems these days and many varieties of tomatoes are consumed with gusto all over the world. There are even festivals to celebrate the fruit, the most explosive of which is La Tomatina in Spain where tens of thousands of locals and tourists splatter each other with 150,000 tomatoes every year.

Tomatoes, thought to have originated in Peru, come in all shapes, sizes and colours and the heaviest fruit ever grown reportedly weighed 3.81kg. The most prolific tomato tree, according to the Guinness Book of Records, produced more than 32,000 tomatoes. It was grown as part of the Epcot Science Project at Walt Disney World in the US.

You can do almost anything with tomatoes — eat them fresh and fry, dry, roast, grill and freeze them. You can also include them in pies, pizzas and quiches and, of course, make them into sauces, salads and soups.

Nutritionally, tomatoes provide good amounts of vitamins A and C, fibre and antioxidant carotenoids such as beta-carotene and lycopene. High intakes of lycopene, which give tomatoes their red colour, have been associated with a lower risk of prostate cancer. Lycopene is more readily absorbed from heated tomatoes and a little fat helps the absorption too.

Keep your tomatoes at room temperature, but out of direct sunlight. You can speed up ripening by putting them in a paper bag. Don’t put them in the fridge unless they are over-ripe as this diminishes their flavour.

Choose plump, firm fruits with no blemishes. Interestingly, loose tomatoes tend to be sold in the South Island with their green stalks and in the North Island without them.