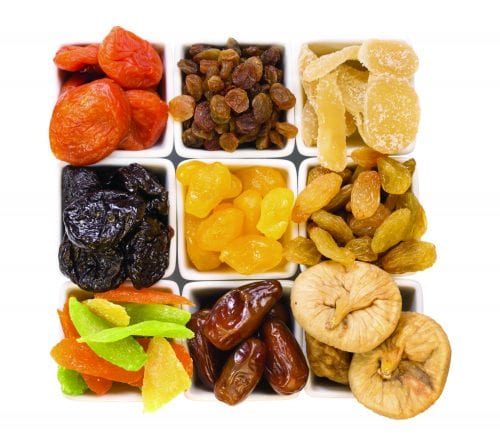 When we buy dried fruit we might assume that’s all we’re getting, but that’s not always the case. HFG senior nutritionist Rose Carr investigates.

We’ve been preserving fruit by drying for centuries. Removing most of the water in fruit stops harmful microbes being able to grow. Sun-drying used to be the most common method for many fruit varieties. Forced hot-air drying is now also commonly used.

What else is in dried fruit?

Some dried fruit is 100 per cent fruit. Others contain as little as 61 per cent fruit. There are also additives used that some people will want to avoid. A quick check of the ingredients list is all you need to make sure you know what you’re getting.

Sulphites (listed as 220-228) can be added to dried fruit to help retain flavour and colour, and prevent browning and spoilage. Because some people (especially those with asthma), are sensitive to sulphites, they must be declared in the ingredients list. A sulphite may be listed as an antioxidant or a preservative but you will always see the words ‘contains sulphites’ on the pack. We found sulphites in dried apple, apricot, mango and pineapple.

Another preservative — potassium sorbate (202) — which we found in some figs and prunes, is fine for most people. However, if preservatives are a concern for you, you may want to avoid it.

You may be surprised that some dried fruit contains a lot of added sugar. While some tart fruits such as cranberries may need a little sugar to be more palatable, most dried fruit is very high in natural sugar already. Sugar is also a preservative but we doubt that’s why most of it is being added. Fresh Life Sweetened Dried Cranberries, who we think are more honest than some as they highlight that the product is sweetened, contain 70 per cent cranberries and 30 per cent sugar. Other brands contained 61 per cent cranberries and 39 per cent sugar. Mango slices ranged from eight per cent to 20 per cent sugar. Adding more sugar would also make the product cheaper.

We think there is enough added sugar in our diets without having more in dried fruit.

A small amount of oil is sometimes used to coat dried fruit such as cranberries, dates and raisins. This may help preserve the flavour and prevent the fruit sticking together over time. The oil may be listed simply as vegetable oil, as on Cinderella cranberries, but we prefer products to state the actual oil so that we know it’s not palm oil. The oil adds very little fat to the end product and we don’t have an issue with it. However, if you’re not keen on added oil with your dried fruit there is often an oil-free alternative.

When fruit is dried most of the water is removed and with it, most of the water-soluble vitamins including folate, beta-carotene and vitamin C. Fibre and potassium, two important nutrients from fruit, are both retained.

When we eat dried fruit we tend to consume more as without water plumping them up they don’t make us feel as full so quickly. For example, instead of one fresh apricot we might eat six dried apricot halves, so we’re consuming a lot more energy (kilojoules). This is compounded if the fruit has added sugar. For example, if we ate one-quarter cup of dried blueberries (with added sugar) we’d have around 590kJ, nearly six times the kilojoules in one-quarter cup of fresh blueberries.

Does dried fruit count as a fruit serve?

We’re advised to eat two serves of fruit as part of our five-plus a day. So how does dried fruit fit in with this? Think of a dried fruit serve as a small handful, around 25-30g. In this serve we’ll get fewer of the water soluble vitamins, more kilojoules and more fibre and potassium than we would from a serve of fresh fruit. It’s best to limit ourselves to a maximum of one fruit serve from dried fruit in any one day, and choose dried fruit with less added sugar.