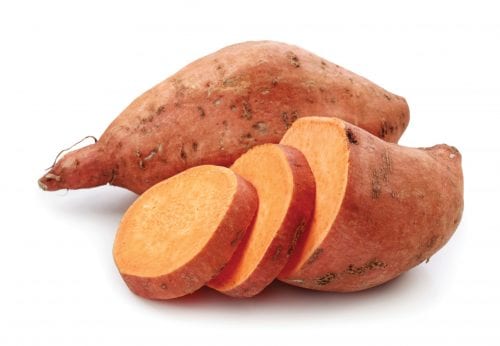 Ever lived overseas and longed for a good old Kiwi kumara? You’re not alone. For many of us who grew up with the red- skinned variety served with our Sunday roasts, other sweet potato varieties found elsewhere just don’t cut the mustard.

But the kumara Maori brought from Hawaiki in about the 10th century wasn’t the revered red variety we eat now, rather a bush with smaller tubers. It wasn’t until the 1850s that an American vine with bigger tubers was imported and today’s versions have evolved from that. The main growing area for kumara is Northern Wairoa in Northland and the three varieties produced commercially are golden, orange and our old favourite, red.

Kumara provides good amounts of carbohydrate, fibre, vitamin C, potassium, folate and vitamins B3 and B6.

Temperature is important to this sweet potato. Too cold and they get damaged; too hot and they start to sprout. Keep them in a cool dark place, but not the fridge.

You can swap kumara for potatoes in almost every recipe — they just cook a little faster. As with spuds it’s a good idea to keep the skin on because it contains fibre, vitamins and minerals. Just scrub and remove any damaged or woody bits.

Kumara can be mashed, roasted, baked, boiled and used in soups, curries, bakes and salads or cooked the traditional way, in a hangi.

Some trivia for navel-gazers: the end of this sweet orange — the bit that looks like a belly button (hence its name) — is actually another tiny unformed orange. And every navel orange is a clone of mutant fruit from a single tree in Brazil.

The story goes that in the early 1800s, a Brazilian missionary found a fruit with an under-developed twin orange growing inside. It was, he discovered, sweeter than other oranges so he wanted to grow more, but it didn’t have seeds. So he grafted a blossoming bud onto another tree. That was successful and two years later, trees were sent to California where they thrived.

Since then trees have been reproduced by cutting and grafting with the result that every fruit is genetically identical to the original Brazilian orange.

More interesting orange facts: they grow on evergreen trees that can produce leaves, blossoms and fruit all at the same time. If the fruit is left on the tree, it may turn from orange back to green — but this does not affect the flavour.

Oranges have good levels of vitamin C and folate. Gisborne is our chief growing region.

Most citrus will keep at room temperature for up to a week but will last longer in the fridge.

Look for firm fruit that have bright skins and small navels — bigger ones can mean the fruit was over-ripe when picked. Avoid oranges that look wrinkled or discoloured. When you have a bumper crop and can’t use or give away the excess, squeeze the fruit and freeze the juice. Grated peel and zest can also be frozen.