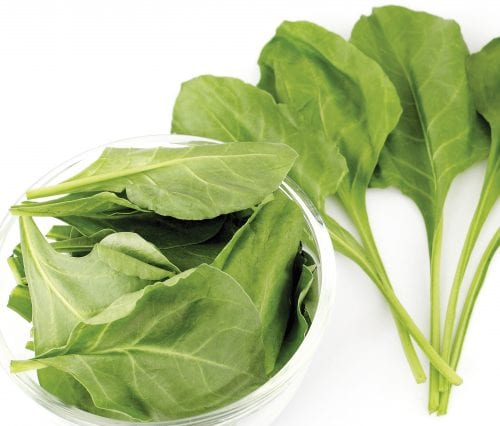 When Popeye the Sailor Man famously exclaimed, “Well, blow me down!” he could have been commenting on the controversy over his favourite vege. Believe it or not, there’s been a hullaballoo over how or why spinach came to be known as such an iron-rich food. One story goes that in the 1870s a German scientist calculating its iron content put the decimal point in the wrong place, ascribing it 10 times more iron than it should have. In 2010 British criminologist Dr Mike Sutton went hunting and concluded there was no evidence for the ‘spinach Popeye iron decimal error story’ (SPIDES) and that the cartoon’s creator, EC Segar, had chosen spinach for its vitamin A content, not iron. Which stands to reason given spinach adds a very small amount of iron to our day, but is a rich source of vitamin A.

Whatever the real story, this leafy green with Asian origins is healthy, delicious, versatile and available all year round.

Keep in a plastic bag in the fridge and use within a week.

Choose bright green bunches with no signs of wilting. When cooking, don’t add liquid — the water from washing is sufficient. Quick-cook methods such as steaming, stir-frying and microwaving are best. Spinach goes well with eggs, pasta, fish and cheese. Avoid cooking it in aluminium or serving it on silver as spinach reacts to these metals.

Throw spinach leaves into your smoothies!

They weren’t called tree tomatoes for nothing! The tamarillo is a relative of the tomato and hails from Central and South America. Because of their origins, the trees like warm, sheltered conditions and are grown in coastal regions, mostly in the North Island, for local and export markets. Yellow and purple tree tomatoes were first introduced from Asia in the late 1800s and in the1920s a Kiwi nurseryman developed a red variety.

Commercial growing started cautiously in the 1930s, but demand grew during WWII when other vitamin C-rich fruits were in short supply. In the 1960s, the fruit were renamed tamarillos — a combination of Maori (tama) and Spanish (amarillo) words — to avoid confusion with their vine-grown relatives. Just two tamarillos add 4g of fibre to our day. They’re also an excellent source of vitamins A and C.

Choose brightly coloured fruit. Tamarillos will last in your fruit bowl for up to a week and for up to two weeks in the fridge.

Cut in half and scoop out the jewel-coloured flesh for baking, meat stews, salads and desserts. To peel whole fruit easily, cover in boiling water for several minutes. Drain and put into cold water. Then, when you pierce the skin, it should slip off easily.