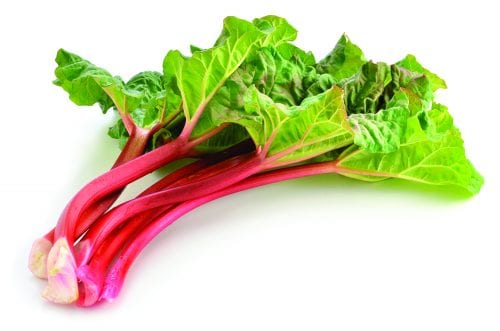 A rhubarb patch was once a common sight in Kiwi backyards. The red-pink stalks of this hardy plant were plucked, chopped up, sweetened, stewed and made into pies and crumbles. For a while this vegetable — no, it’s not a fruit, we just tend to think of it as one because it’s usually in sweet dishes — went out of fashion, but the rhubarb renaissance is well and truly under way.

You’ll find rhubarb festivals all over the world and in the UK, there is even a ‘rhubarb triangle’. Planes don’t disappear there (as they do in the Bermuda Triangle) and the crop is not illicit (as it is in Southeast Asia’s Golden Triangle), it is simply a 23 square kilometre patch in West Yorkshire where rhubarb is grown in dark sheds (and where the first crop of the year is harvested by candlelight) to produce tender, sweet stalks. There’s even a giant rhubarb sculpture there.

Rhubarb is one of the most calcium-rich vegetables, however the absorption is inhibited by oxalic acid, which is also present in the vegetable. Cooking can, however, reduce the effect of oxalic acid. Rhubarb contains fibre, potassium and vitamin C.

Rhubarb keeps best in a plastic bag, in the fridge.

At the shops look for firm, glossy red stalks. But why not plant your own in the garden or in a large pot? They’re easy to grow. When it’s time to harvest (it’s at its best May to October) twist and pull the stalks from the crown, rather than cut them, which can open the plants up to disease. And be aware, the leaves are toxic so don’t eat them!

This member of the carrot family, which is also enjoying a culinary comeback, was once used as a sweetener. Before the sugar beet industry was established in the 19th century, the juices of the parsnip were evaporated and the residue was used like honey. The sweetness from this unassuming root vege, known as a white carrot in Scotland, is due to the starch being converted to sugar during frosts. As a result, they are not usually grown in warmer climates.

Parsnips contain dietary fibre, which is important for bowel health. They also contain useful amounts of folate and niacin.

Like rhubarb, parnsips keep best in a plastic bag in the fridge.

Choose smooth, firm vegetables rather than really big ones, which tend to have woody centres. Young parnsips don’t need to be peeled.