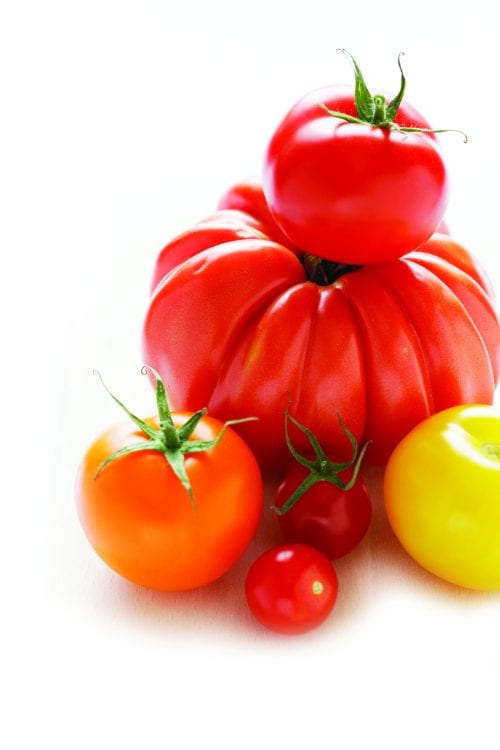 Botanically speaking, tomatoes are fruit — but as tomatoes are used in savoury dishes, we tend to think of this fruit as a vegetable.

Varieties include hearty, meaty beefsteak tomatoes, medium-sized oval Roma tomatoes (also known as plum tomatoes) and small, round cherry tomatoes. Traditional heirloom tomatoes refer to tomatoes cultivated from seeds that have been handed down over time from family to family.

Choose firm, deep-coloured wrinkle-free tomatoes with that distinctive ‘sweet’ tomato smell. Ripen unripe tomatoes by storing them with ethylene-omitting fruit (such as bananas or apples), or leaving them exposed to the sun on a windowsill. If the stem and leaves are intact, look for fresh rather than wilted greenery.

Store ripe tomatoes at room temperature (away from sunlight) for up to a week. Don’t store tomatoes in the fridge as this affects their texture and flavour. Store half-used canned tomatoes in an airtight container and refrigerate for up to two days. Whole tomatoes, chopped tomatoes and tomato sauce freeze well.

Tomatoes add vitamins A and C as well as fibre and potassium to our diet. Tomatoes contain the antioxidant lycopene, which is in especially high amounts in processed tomato products such as canned tomatoes or tomato juice, sauce or paste. In addition to reducing inflammation, foods containing lycopene have been shown to reduce risk of prostate cancer, according to the expert report from the American Institute for Cancer Research.

Different tomato varieties lend themselves to different uses. Beefsteak tomatoes are good to barbecue, great cut in chunks for salads and hold up well to being stuffed (try our Lamb, feta and couscous-stuffed tomatoes).

Roma tomatoes have fewer seeds and are therefore good for sauces and stews (our Tomato sauce recipe is a versatile classic).

Cherry tomatoes are small, sweet and with intense flavour, great for salads and pasta sauces. Or try them in our Corn fritters with chargrilled cherry tomatoes and avocado salsa recipe.

Tip: To avoid tainting the tomato taste, don’t cook tomatoes in aluminium cookware as the high acidity will react with the metal.