How do they produce potatoes? 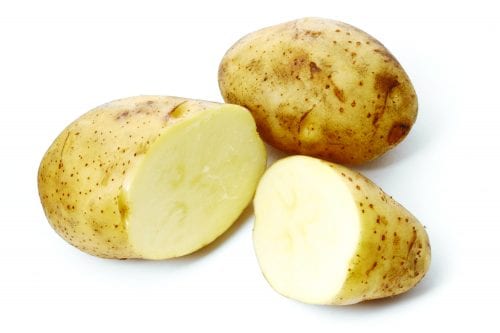 Kiwis love potatoes! Niki Bezzant looks at how our favourite vege is grown and processed.

We are a nation of potato lovers: 97 per cent of us eat them, and they come top of the list of our favourite veges. More than half of us eat fresh potatoes four or more times a week, and on top of that (slightly more worryingly), we also munch our way through seven million serves of hot chips per week.

Around 500,000 tonnes of potatoes are grown each year in New Zealand, of which about one-quarter are exported.

Potatoes are grown and harvested all-year-round, and all over the country. The main growing areas are Pukekohe, Manawatu and South Canterbury. There are 285 potato growers in New Zealand, spread over 10,534 hectares.

We grow over 50 varieties of potatoes here. The main ones are Rua, Nadine, Agria, Moonlight, Desiree, Ilam Hardy and Red Rascal, but there are others. In summer, special varieties of new potatoes such as Jersey Bennies are a seasonal treat. Some potato varieties are available all year but their characteristics change over the course of the season, becoming, for example, less waxy and more floury over time.

Potatoes grow from ‘seed’ potatoes (which are specially bred and look just like potatoes that have sprouted in your cupboard). The seed potatoes are dropped in furrows by a mechanical planting machine at precise depth and spacing depending on season and variety. The soil is ridged over the seed potatoes to form rows. The ridges protect the tubers from sunlight if they grow close to the surface. As they grow, potatoes are monitored for diseases and pests and treated accordingly with crop protection products and biological control methods such as the use of companion planting to attract beneficial insects (predators) of pests.

When potatoes are fully grown, the potato plants above the ground die back. This usually takes about three to four months. Potatoes are harvested using machines which work through the rows gently lifting the potatoes out of the ground, separating the earth and transferring them to storage containers for delivery to pack-houses. Once in the pack house it’s simply a matter of cleaning, grading and packing the potatoes before they’re transported to the shops.

Potatoes in bags are now labelled more and more by end use — in other words, the packaging explains what the potatoes are best used for. You will most often see potatoes labelled one of three things: Boiling and salad potatoes (also known as ‘waxy’ potatoes), All Purpose potatoes, or Baking, mashing and roasting potatoes (also known as ‘floury’ potatoes). You’ll get the best end results if you choose your potatoes based on what you’re planning to do with them. A waxy potato, which works really well in potato salad, will be disappointingly soggy if roasted. Likewise, a floury mashing potato will most likely give you a mushy, dry and crumbly potato salad. All Purpose potatoes are OK, if you can’t get anything else — but the results won’t be as good as if you had chosen a specialist potato. If you’re buying loose potatoes, it pays to know which varieties fall into which categories (see Which potato for the job, below).

Which potato for the job?

*Potatoes are affected by weather, growing conditions and the time of the year so it is best to buy potatoes that have been cook tested and labelled for end use.