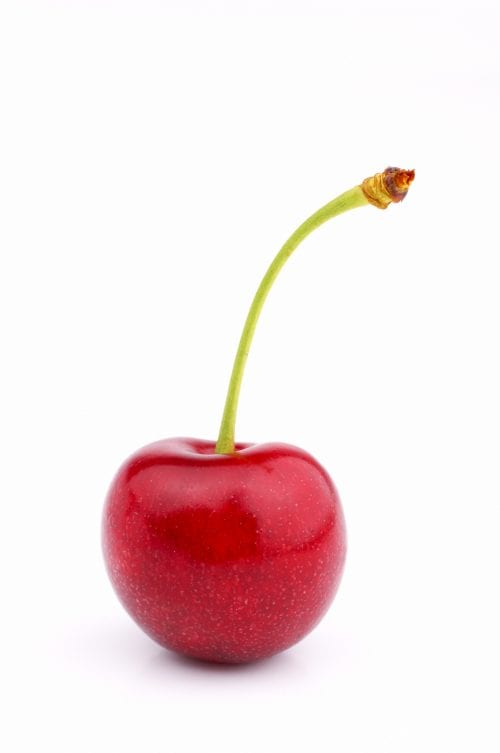 We explain why cherries are good for us, as well as being delicious.

When I think of cherries, I think of the taste of Christmas. Platters with fresh cherries, nuts in their shells and preserved ginger were special Xmas treats when I was young. These days, NZ-grown cherries start making an appearance in stores from late November, but you might also see imported cherries from the US in the middle of winter.

Generally cherries are classified as sweet or tart. The most common sweet cherries that you'll buy fresh include the bing, dawson and sweetheart varieties. Tart are more likely to be found in cans or jars. Ones I've sampled were in a light sugar syrup – just enough to take the tartness away – and pre-pitted. Tart cherries come in very dark or black varieties like morello, or lighter coloured varieties with a clear juice like montmorency.

Glacé cherries are simply cherries that have been candied. Candied fruit are soaked in sugar syrup for a number of days until the syrup replaces the moisture in the fruit. The sugar preserves the fruit and when dried, the candied fruit will retain its shape and colour.

Fresh cherries should be kept in the fridge, preferably in a shallow bowl. If they're piled on top of each other the weight can crush and damage them. While they may keep for longer than a few days, cherries are highly perishable and they're better fresher. To avoid damaging the fruit, wash them just before using rather than before you put them in the fridge. Refrigerate cans or jars of cherries after opening for up to a week. Any canned food should be transferred to a glass or plastic container before you put it in the fridge.

Add cherry red to your day

Folk medicine has for centuries credited cherries with easing the pain of arthritis and gout, and scientific research is now emerging to support this. While the anthocyanins found in sweet and tart cherries vary in their concentrations, both contain anthocyanins 1 and 2, which scientists believe may explain their anti-inflammatory effect.

Cherries are also one of the few food sources of melatonin, with tart cherries containing very high amounts. Melatonin is involved in the body's circadian rhythms and is a natural sleep enhancer. If you're a shift worker, you're suffering jetlag or just have difficulty with sleep patterns, it might be worth trying a serving of tart cherries! If that doesn't work, rest assured the melatonin is helping out anyway; it's another powerful antioxidant.

Cherries also contain quercitin, a compound being studied for its involvement in blood clotting and the reduction of risk for heart attack and stroke; ellagic acid, used in cancer-preventing drugs; perillyl alcohol, which may have anti-tumour activity; and beta-sitosterol, high amounts of which are associated with lower blood cholesterol levels.

While scientists love to isolate compounds in foods so they can identify what they do and perhaps develop drugs or food additives, we just love to eat foods as a whole. Adding cherries to a diet rich in vegetables and fruits may well enhance cardiovascular health, help prevent against cancer and even slow the aging process.

Depending on the variety, half a cup of fresh cherries contains up to 200kJ; a low-energy snack whichever way you look at it. For tart cherries in syrup the energy content varies from around 320-380kJ per half cup, depending on the brand.

Half a cup of glacé cherries contains around 1450kJ, but hopefully you're not tempted to munch on those as a snack!