Why you should eat tomatoes 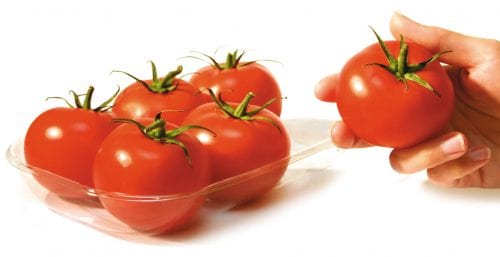 We explain the healthy benefits of tomatoes.

As a native of South America, tomatoes were originally found in Aztec cuisine and inextricably linked with chilli peppers. The Italians, who have embraced the tomato as indispensable in their cooking, appear not to have even seen a tomato until the 1500s.

As a distant relation of the poisonous deadly nightshade, the tomato was initially looked upon with suspicion by Europeans and grown merely as an ornamental plant. However, by the 1800s large-scale cultivation and canning operations were evident in both Italy and America; tomato ketchup, the iconic condiment of America, was first produced in the 1830s.

In NZ, tomatoes are our most popular vegetable (although it is a fruit, we tend to think of it as a vegetable), out-selling even potatoes, mushrooms and carrots. And despite their ready availability in stores, throughout NZ tomatoes are planted with eager anticipation at Labour weekend by those of us who just can't get enough.

Tomatoes come in many different sizes, from tiny cocktail or cherry tomatoes to the big fleshy beef or giant variety. Flavoursome vine-ripened tomatoes have become a foodie favourite.

Most of our tomatoes are now grown in hothouses but there are still some being grown outdoors. Tomatoes available in winter may be imported and can lack flavour. When selecting tomatoes, give them the 'sniff test'; the tastiest tomatoes will have a rich aroma.

Tomatoes will ripen if you store them at room temperature out of direct sunlight. You can speed up the process by putting them in a paper bag, although they may not be as flavoursome. Never put tomatoes in the fridge: the cool temperature stops the ripening process, ruins the tomato flavour and the flesh loses its firmness. You're better to freeze them and use them later in cooking.

Tomatoes contain many beneficial compounds including the antioxidants vitamin C and E, plus a number of carotenoids including beta-carotene and lycopene. Lycopene, which gives tomatoes their red colour, has been found to be the most powerful antioxidant of all carotenoids.

Although small amounts of lycopene are found in a few other coloured fruits – watermelon, pink grapefruit, pink guava and papaya – tomatoes and tomato products are the major source of lycopene in our diets. Cooked or processed tomatoes contain more lycopene, on a weight for weight basis, than fresh tomatoes. Heating or cooking tomatoes makes the lycopene more readily absorbed in the gut, so the richest sources of lycopene are canned tomatoes, tomato paste or heat-processed tomato juice. As lycopene is fat soluble, it is also more readily absorbed when there is some fat or oil included in the meal.

High intakes of lycopene have been associated with a decreased risk of prostate cancer in men. Researchers are investigating the role of tomatoes, lycopene and their other constituents in the prevention of other cancers. While there is some evidence that tomato consumption may be protective for lung, stomach and cancers of the upper digestive tract, research is ongoing. Some studies also suggest that lycopene may play a role in the prevention of cardiovascular disease.

Used in many cuisines around the world, tomatoes marry well with vegetables, eggs, cheese and meat, and are complemented by a wide range of flavours including garlic, onion, basil, thyme, oregano, chilli and peppers.