What to do with eggplant 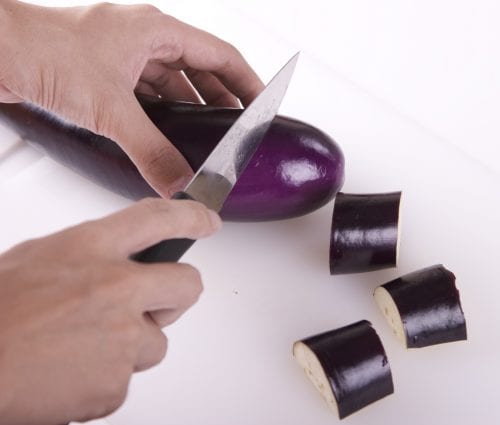 We explain what to do with a seasonal favourite.

Eggplant (or aubergine if you're French) is a gorgeous, glossy purple vege that like tomato, is actually a fruit in disguise. There are many varieties of eggplant ranging from the tiny, marble-sized Thai eggplant to long, thin, green-yellow ones, but the most familiar and available is the large dark purple pear-shaped variety. Eggplant is common in southern Europe where it is used in classic dishes such as moussaka (Greece) and ratatouille (France). Right now eggplants are plentiful and cheap, so why not add them to your vegetable roster?

Where do I get it?

Look for eggplant in the produce section in the supermarket and at the greengrocer. Pick heavy, glossy eggplants with no brown spots on the skin.

Eggplant has a mild flavour that works well with tomatoes, onions, garlic and herbs. It's also great with Asian and Middle Eastern spices. This is one vege that needs to be well cooked; it's not so tasty when still crispy. Here are some quick, simple and tasty ways to use eggplant:

Tip: Many eggplant recipes call for the cut eggplant to be salted, drained and rinsed. This is to remove bitterness. But only very ripe eggplant tends to be bitter, so it's usually fine to miss this step out.