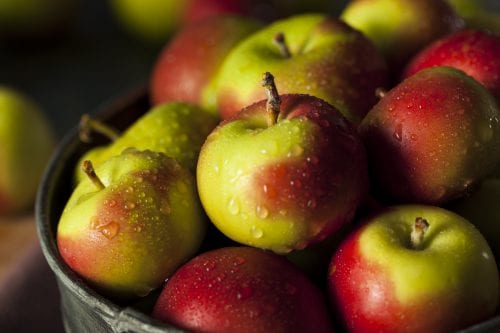 An apple a day keeps the doctor away – or so they say. We get to the core of this popular fruit.

Availability: Apples are in season from February to August, depending on the variety. Gala and Royal Gala are the first to be picked, Fuji the last.

Choosing: Thanks to cool store technology, apples are available all year, but they're at their best when they're newly in season.

Nutrition: Apples contain a range of vitamins, minerals and fibre and have very good antioxidant activity. Don't make a habit of eating the seeds though – they contain a naturally occurring toxin called amygdalin. The occasional seed is not a problem, but for a young child, swallowing only a few seeds could be serious.

Red Delicious: Sweet with a dark red-striped skin. Harvested from mid-March to mid-April.

Granny Smith: Bright green with a crisp, white flesh. Refreshing and tangy. Excellent for cooking. Harvested in April and early May.

Fuji: Very sweet. Varies from a soft pink stripe to a bright red colour. Matures in the latter part of the season and stores well.

If you are using sliced apples in cooking, stop flesh from turning brown by drizzling with lemon juice.