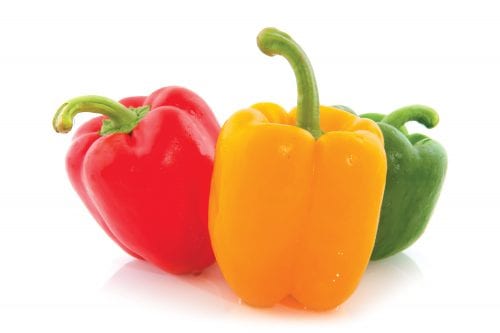 Capsicums come in various shapes and colours. Green and red capsicums grow on the same plant: a red capsicum being a ripe green one. Yellow capsicums taste moderately sweet and red capsicums have the sweetest flesh. (White, purple brown and lime green capsicums can also be found.) The vegetable is mostly hollow inside with edible, but bitter, seeds. Capsicums are also known as bell or sweet peppers.

Store capsicums at room temperature for three to four days or refrigerate for up to one week. Once sliced, wrap tightly in plastic or store in an airtight container and refrigerate – to last for two to three days. Leftover capsicum can be frozen from fresh in a sealable plastic bag, but will lose its crunch when thawed.

Capsicums are a versatile vegetable and can be eaten raw, grilled, barbecued, marinated, roasted or stuffed. Blend roasted capsicums to make a spread to top crostini or make Roast capsicum and cannellini bean dip for platters. Try our Tomato, salsa pesto dip or simply slice red, green and yellow capsicums for colourful canapés.

Did you know? A red or yellow capsicum (100g) has four times as much vitamin C than an orange of the same size.