How do they make margarine and table spreads? 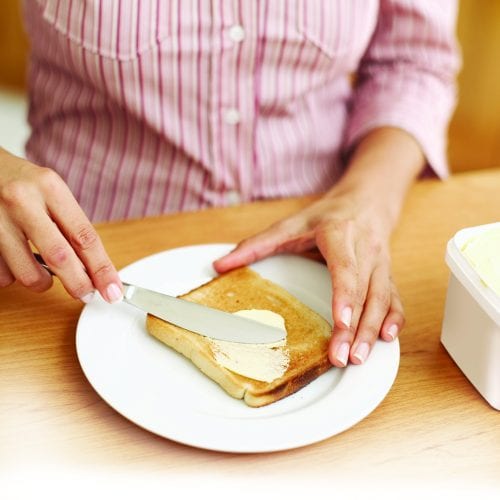 HFG senior nutritionist Rose Carr looks at how common foods get from field to plate.

The main ingredient for most spreads is a liquid oil such as sunflower, canola or rice bran oil. These are high in polyunsaturated and monounsaturated fats. The oils used are refined oils, the same as we buy in the supermarket. Some spreads include other liquid oils such as olive or avocado oils, but these oils are considerably more expensive.

To make a spread, the liquid oils need to be mixed with about 20 per cent hard oil. Most often palm oil and palm kernel oil are used: these have a high saturated fat content which makes them harder at room temperature than other vegetable or seed oils. Typically the palm/palm kernel oils are hydrogenated – a process which makes them solid and removes trans fats. Then they are blended with the other oils and a process called interesterification is used to make the mix spreadable and more pleasant to eat.

In the case of spreads made from rice bran oil, the hard oil used is from what is known as the ‘hard fraction’ of the rice bran oil which is semi-solid at room temperature. This means there is no hydrogenation or interesterification in the process of making these spreads.

Water is the next main ingredient. Like butter, margarines and spreads are an emulsion of water and fat and the less fat in the spread, the more water is mixed into the blend. Salt is added to enhance the flavour, although the amount varies.

Other ingredients you may find in your spread include milk powder – this is added to enhance the mouth-feel of the spread and gives it a dairy flavour. Emulsifier is added to keep oil and water-based ingredients mixed together. Without added colour a spread would be white. Originally the yellow colour was added to mimic butter. While some are now lighter in colour, we still expect spreads to be yellow. Most spreads have flavour added and when this is derived from dairy it will be declared as an allergen on the label. Vitamins A, D and E are permitted to be added, so some spreads will have these. Antioxidants are sometimes added to help keep the oils and a preservative is usually added to spreads with 65 per cent fat or less to prevent spoilage. Some spreads are enriched with plant sterols. These are relatively expensive, but for people with high cholesterol, studies have shown they can help reduce LDL ‘bad’ cholesterol.

When oils are partially hydrogenated, some of the fat is converted to trans fat. Trans fats are even more unhealthy for us than saturated fats. However, it is worth noting that in New Zealand, oils are fully hydrogenated and most spreads now contain less than one per cent trans fats. New Zealanders consume fewer trans fats than people in most other countries. In fact, we get far more trans fats from natural sources – such as butter and milk – than we do from manufactured foods.

Although most people still use margarine as a generic term to mean any type of table spread, the Food Standards Code stipulates that margarine must contain at least 80 per cent fat. Spreads need around 60 per cent fat to be suitable for baking, while the lower-fat spreads can be used for ‘spreading’.