Are you eating more than you think (without realising)? 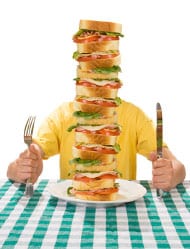 Unless you are extraordinarily disciplined with your eating, chances are that you eat more than you think you do.

It’s a psychological phenomenon that has been widely researched, most prominently by Brian Wansink at Cornell University in the US. In his book Mindless Eating, Wansink shows that even people of normal weight underestimate their food intake by around 20 per cent. People who are overweight can underestimate by over 50 per cent. He describes the gap between what you think you eat and what you actually eat as the ‘mindless margin’ and has done many experiments showing that we can easily be fooled into eating more than we need or believe we have eaten. There’s a combination of factors at play – many to do with our eating environment – that conspire against us here.

‘Portion creep’ is a huge trap. It’s a term describing the relentless upsizing of portion sizes of food over the years. You may say “I just had a muffin” or “I just had a bowl of cereal”. But research shows there can be huge variation in what a portion is. A muffin can be bigger than your fist, and pack nearly as many calories as a meal. (We found some at one café chain that contain the same kilojoules as some of our HFG meals, along with seven teaspoons of sugar per muffin!)

A bowl of cereal could contain anything from the standard half-cup to two cups, depending on the size of your bowl and your appetite. I tested this as an informal experiment in the HFG office – people served themselves amounts ranging from 30 grams to 100 grams of cereal. But in our minds, it’s still one serve. Our brains focus on the number of serves, not the amount.

Restaurant and fast food outlets have taken advantage of this. In the 1970s, McDonald’s had one size of fries – what’s now known as ‘Small’. Now, the standard with a ‘combo’ meal is a large – double the size of that original serve. Large portions are now everywhere, from cafes to pubs to homes.

So what can we do? The good news is we can fight back with a little bit of mindfulness. Try simply using smaller bowls or plates for a start. You’ll eat less without feeling deprived, because you’ll still have a ‘full’ plate. Cut muffins, slices and cakes in half and share or save the rest for another day. And don’t be sucked into ‘value’ deals. Buy only what you really want to eat. At the buffet, you don’t actually have to pile your plate high, just because you can.

We may feel if we’re not getting a large plate full of food, it’s not good value. But we need to realise that ‘good value’ has a cost associated with it – we just pay with our bodies, not our wallets.