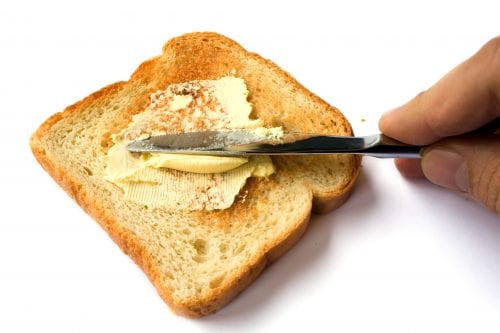 A guide through the wide variety of spreads on the market.

A brief history of spreads

When I was a girl, butter was what you put on your toast, no debate. To be honest, there wasn't actually an alternative. Then margarine came along and took the world by storm with its claim of healthier fats. You see, butter is over 50% saturated fats, the ones that will clog your arteries and lead you to sudden death. Margarines on the other hand were made with polyunsaturated fats, the good guys.

Unfortunately what wasn't realised in the early days was the margarines also contained trans fats, which were just as bad as, if not worse than, saturated fats. Although the margarines did have less than 30% trans plus saturated fats, this small trans fat problem did tend to undermine the 'good fat' story.

Making spreads has changed a lot since then, and these days many spreads contain less than 1% trans fats. You needn't accept anything more. But don't assume: watch out for ones like Meadowlea Original which still contains 8% trans fats.

Not any more, it doesn't. The food regulations state that to be called butter or margarine the product must be at least 80% fat. These days we know better than to use spreads so high in fat, so if it's labelled as 'butter' or 'margarine', walk on by; you really don't need it.

If you love the butter flavour (and promise not to kill yourself using lashings of it) you could try a butter blend like Anchor spreadable, a mix of butter and oils (70% fat, 32% saturated) or preferably a lower-fat version like Mainland Country Soft lite (60% fat, 24% saturated). Having said that, a solely oil-based spread is highly recommended as these will be a lot lower in saturated fats, and many are much lower in total fat as well.

Monounsaturated fats have been shown to be good for heart health. Spreads made with olive oil, canola oil, avocado oil or rice bran oil will tend to be higher in monounsaturated fats than those made with sunflower or other, often unspecified, vegetable oils. But the best way to know what you're getting is to look at the nutrition information. I prefer spreads where over 1/3 of the fat is monounsaturated.

Baking and cooking with reduced-fat spreads

As a rule of thumb for baking recipes, when you're replacing butter or margarine use a spread with a minimum of 60% fat, as the lower fat spreads contain more water. Spreads with 50-60% fat can be used for most cooking and sautéing (although an oil/spray would be better).

Plant sterols are naturally found in small amounts in many fruits, vegetables, nuts, seeds, cereals and legumes. There is evidence that spreads enriched with plant sterols, like Flora pro-activ and Meadowlea Logicol, can help reduce cholesterol levels (total and LDL cholesterol) by reducing the absorption of cholesterol. Because plant sterols have a similar chemical structure to cholesterol (a sterol found mainly in animal tissue), they compete for absorption.

You need to consume 25g of the enriched spread each day for it to be effective and there's no extra benefit from having more. 25g (that's about 5 teaspoons) has around 625kJ in the standard spreads but only about 375kJ in a light version. Many (but not all) people with high cholesterol also need to lose weight, so I'd always recommend going for a light version. If you already take cholesterol-lowering medication, it's best to talk to your GP about whether these products are suitable for you.

Rice bran oil spreads also contain plant sterols, from the rice bran. Although these may also help lower cholesterol, there is no indication how much would be required to do that. Alfa One Rice Bran oil spreads contain 1.5g plant sterols per 100g compared to Flora pro activ and Logicol, which contain 8g per 100g.

Bored with spreads, or not that keen on the flavour? One option is to ditch the spread entirely. People think I'm odd, but I never use spreads in sandwiches and I put honey or peanut butter straight onto toast without any spread. I've been doing it for so long the thought now of putting a fatty spread on first is quite unappealing (I prefer my fat in chocolate!). If you're not quite ready to ditch the spreads altogether you could try using one of these:

What does it mean?

A spread is going to contain fat, that's what enables it to do the things you want it to do: like moistening your bread or frying your onions or adding texture to your baking. So it comes down to choosing the right fats, in the right amounts, and not slathering too much on your toast. For anyone who needs to lose weight, changing to a low-fat spread is a no-brainer.