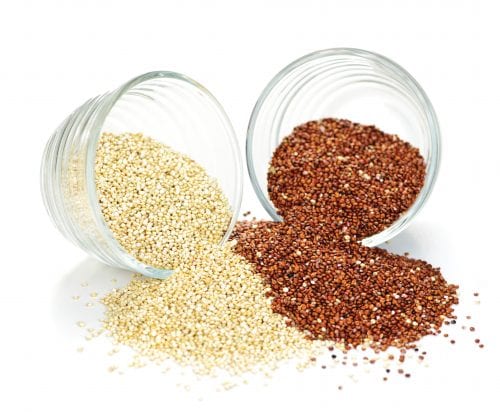 This little grain has a big nutritional impact. It is a good gluten-free substitute for couscous and bulgar wheat and has many other uses.

To prepare quinoa, rinse well, cover with water or liquid no-added-salt stock (usually one part quinoa to two parts liquid — check packet directions), cover with a lid and bring to the boil. Reduce heat and simmer for 15-20 minutes until liquid is absorbed then remove from heat and allow to rest for a few minutes with the lid on to finish cooking in its own heat. Fluff with a fork and serve. Plain quinoa is a good accompaniment to curries and stews.

Quinoa makes a good soup base. Slice 1 onion, 1 carrot and 1 celery stalk then sauté vegetables in a little olive oil.

Add 750ml liquid salt-reduced vegetable stock, around 1/2 cup quinoa (rinsed) and a 400g can cannellini beans (drained, rinsed). Simmer for 20 minutes or until everything is tender. Add plenty of chopped kale or spinach and simmer until cooked. Blend, if desired. Quinoa is also a good gluten-free alternative to pasta in minestrone soup.

Gently fry 1/2 sliced onion and 1 minced garlic clove in a little oil spray over a medium heat. Add 1 teaspoon cumin and fry until you smell its aroma. Stir in 1 cup cooked quinoa and 1 tomato (chopped), then transfer mixture to a plate and top with 1 poached egg.

Fry 1 chopped onion in a little olive oil with some minced garlic then add sliced mushrooms and cook until softened. Stir through cooked quinoa, season with black pepper and top with fresh chopped parsley.

Toasting quinoa enhances its nutty qualities — perfect for a homemade muesli. Preheat oven to 180°C. Lightly spray a baking tray with oil. Mix 11/2 cups cooked quinoa with 1 tablespoon maple syrup, 1 tablespoon olive oil and 2 tablespoons chopped mixed nuts. Spread thinly on the prepared baking tray and roast in oven for 15 minutes, stirring the mixture once or twice during cooking so it doesn’t burn. Allow to cool completely then break mixture up and store in an airtight jar, ready to serve with low-fat plain yoghurt.

As it soaks up liquids so well, quinoa makes a good base for salads, served with a light dressing. Mix 3 diced tomatoes, 1/2 diced cucumber, 4 chopped spring onions and a handful of chopped fresh parsley with 3 1/2 cups cooked quinoa. Drizzle with a dressing made with 3 parts lemon juice to 1 part olive oil, seasoned with black pepper. This salad goes well with grilled fish or chicken.

For a change to your usual porridge, follow the basic recipe for quinoa (see 1: Easy to prepare) but replace water with trim milk. Add fresh fruit, a little honey, vanilla or unsalted nuts for a filling, nutrient-rich breakfast. Or try cooking quinoa in a blend of trim milk and light coconut milk then add chopped fresh mango.

For an alternative to traditional sage and onion stuffing, combine 1 1/2 cups cooked quinoa with 1/2 diced onion, 2 garliccloves, a few toasted chopped walnuts, 2 teaspoons reduced-fat spread, a handful of fresh parsley and sage and some black pepper. Use mixture to stuff chicken or bake separately in a small tray to serve with any roast.

To make 12 sweet muffins, place 75g rinsed quinoa in a small saucepan and cover with 200ml boiling water. Bring to the boil, reduce to a gentle simmer, cover with a lid and cook for 15 minutes or until water is absorbed. Uncover and set aside to cool. Preheat oven to 180°C. Mix 2 1/4 cups flour, 1 cup brown sugar, 2 teaspoons baking powder, 1 teaspoon ground cinnamon or mixed spice and 3/4 cup sultanas in a large bowl. Stir through cooled quinoa. In a small bowl, whisk 175ml trim milk, 1 beaten egg and 1 teaspoon vanilla extract. Add to flour and quinoa mixture and mix until just combined. Spoon mixture into a lightly oiled 12-hole muffin tin and bake for 25-30 minutes until springy to the touch. Cool in tin for 10 minutes before leaving to cool on a wire rack.

Although relatively new to our kitchens, South Americans have been tucking into quinoa for at least 4000 years. It’s not a true grain like wheat or rye, which helps to explain why it is noticeably higher in protein than these foods. One quinoa serving (1/4 cup or 45g uncooked) has 590kJ and 6g protein, about the amount of protein you find in an egg, and twice the amount contained in white rice. Quinoa is also a good source of fibre (3g), iron (2mg), thiamin, riboflavin, vitamin B6 and folate.