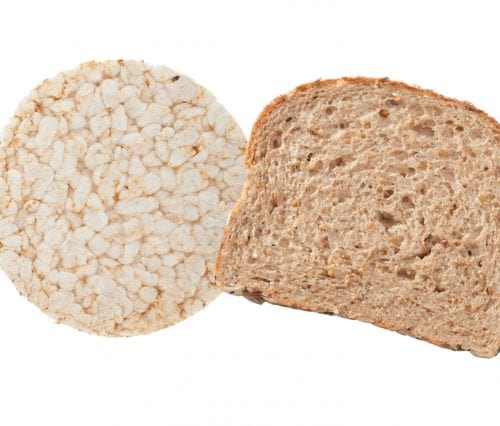 Hungry for a snack? A bit of hummus on something should hit the spot, but which will fill you up for longer: rice cakes or bread?

If you want crunch or are looking for a lower energy option, you might be tempted to spread your hummus on some rice crackers.

Although hummus served on two Sun Rice Original Thins Rice Cakes contains 23 per cent less energy (kilojoules) than if it’s served on one slice of Freya’s Dutch Wholemeal Grain bread, the bread option contains nearly double the protein and fibre. It’s this protein and fibre that helps fill us up, and keep us full for longer – an important feature when choosing a great snack.

A slice of Freya’s bread is higher in sodium than two Sun Rice cakes, but neither are high sodium snacks. Many rice cakes on the market contain just rice, but not all rice cakes are a low sodium choice. Flavoured rice cakes can contain nearly the same amount of sodium as the bread.

Freya’s Dutch Wholemeal Grain Bread and Sun Rice Original Thins Rice Cakes are both healthy vehicles to carry your hummus for a snack. They are low energy, but you’re likely to feel more satisfied for longer with the bread option.