Your guide to bread 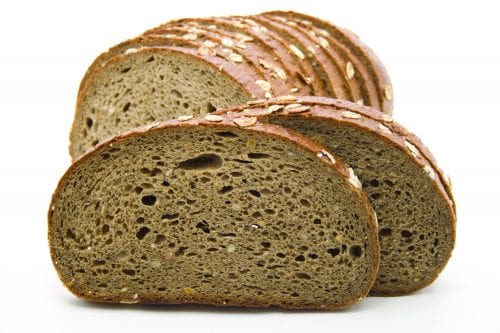 Once a household staple, bread has been singled out as the villain by followers of the low-carb movement.

Nutritionists still recommend bread as a good source of energy, providing essential nutrients and especially, fibre. Of course, not all breads are created equal so we present the facts to help you make healthier choices.

Some people say bulk-produced bread isn’t as healthy because it’s made using a commercial process. In New Zealand about 80 per cent of the bread made is by the mechanical dough development method (MDD) which reduces the amount of time the dough needs to rise from two hours to 10 minutes. Some people think mass-produced breads are not as good for us as artisan-made bread, which proves and rises ‘naturally’, but there’s no evidence for this. Some also worry about the additives used but it’s worth remembering all additives used in food are approved for use in the Food Standards Code, with safety being a key element. As for nutrition, the vitamin content of both white and wholemeal bread baked using MDD is comparable to loaves made using traditional methods.

Potentially, but the Heart Foundation has been working with bread manufacturers to reduce sodium in our bread and have set a target of no more than 450mg sodium per 100g bread. The ‘tick’ criteria for sodium in bread is 400mg or less sodium and a lot of manufacturers are achieving this.

The maximum recommended daily intake of sodium for an adult is 2300mg. So four slices of bread could contribute more than 600mg sodium, or more than one-quarter of the daily upper recommended amount. The recommended upper limit for sodium for children under 14 years old is even less. This makes it important to use low-salt sandwich fillings — chicken, eggs, canned salmon or canned tuna in water, instead of ham and cheese.

Loaves don’t have as good a taste or texture without salt. Salt also helps to slow down the rising process, which improves the crumb and gives a better crust. Salt acts as a preservative, too, helping bread stay fresh for longer.

According to a 2012 report from the British Nutrition Foundation, there’s little proof of this. Dr Elisabeth Weichselbaum, New Zealand registered nutritionist and author of the report says: ‘For the average healthy consumer, there’s no evidence that eating bread regularly causes bloating or gastrointestinal discomfort, or that the way in which it’s produced leads to different effects on the gastrointestinal system.’

If you do suffer from bloating, don’t assume wheat is the culprit. A 2010 report by the University of Portsmouth discovered that while up to 20 per cent of adults thought they suffered from a food allergy or intolerance, in reality fewer than two per cent were affected. The research also revealed wheat allergy was the most commonly self-reported food allergy.

‘The proportion of people who perceive they are allergic to wheat is clearly higher than the actual prevalence of wheat allergy,’ says Dr Weichselbaum, ‘and unnecessarily avoiding wheat may lead to inadequate intakes of key nutrients.’

So, if you think you have an issue with wheat, ask your GP for tests before cutting it out.

What if I have coeliac disease?

That’s different. Gluten refers to proteins found in wheat, rye, barley and oats, which can cause digestive symptoms such as stomach cramps, diarrhoea and bloating in sufferers of coeliac disease. This disease is thought to affect around 65,000 people in New Zealand. For these people a gluten-free diet is essential, and that means eliminating all foods that contain gluten, including wheat flour, and therefore standard bread. Fortunately, there are good gluten-free breads on the market (see Healthier loaves that pass the HFG taste test below).

Recommended intakes for carbohydrate range between 45 and 65 per cent of energy intake, predominantly from low energy density and/or low glycaemic index foods. At HFG, we use the lower figure of 45 per cent. This equates to about 234g carbohydrates for an average person consuming 8700kJ per day. A medium-sized slice of bread, roughly 35g, provides around 10–16g carbohydrate. So two slices at breakfast and two slices in a sandwich for lunch will give you 40–65g of your daily carbohydrate total.

As well as the carbohydrate, which we use for energy, bread provides us with protein (11 per cent of the protein in New Zealanders’ diets comes from bread), B vitamins, the bone-building mineral calcium (bread provides 10 per cent of total calcium in our diets) and energy-boosting iron (providing 12 per cent of our iron intakes). Folate and iodine are added to all bread, except organic breads, in order to fortify our low intakes of these minerals. Iron and calcium are also added to some breads. Wholemeal and grainy varieties also provide fibre and are often higher in some B vitamins.

Make your own bread (it’s easy!)

To make bread, all you need is flour, water, salt, yeast, a little fat (in the form of either oil or reduced-fat spread) and a small amount of sugar. The sugar is needed to aid browning and hold in the moisture of the loaf.

Wholemeal: This flour contains far more fibre than white. The bran reduces the effectiveness of gluten, however, so loaves don’t rise as much and are denser. That’s why a lot of recipes combine wholemeal flour with white flour.

There are three types. While yeast types are interchangeable, they require different treatments.

Fresh and dried yeasts need to be mixed with sugar and warm water, set aside in a warm place for 15 minutes until frothy then used within 15 minutes.

Instant yeast is an easier option — the yeast can simply be stirred into the flour. Tasti and Edmonds both make good options.