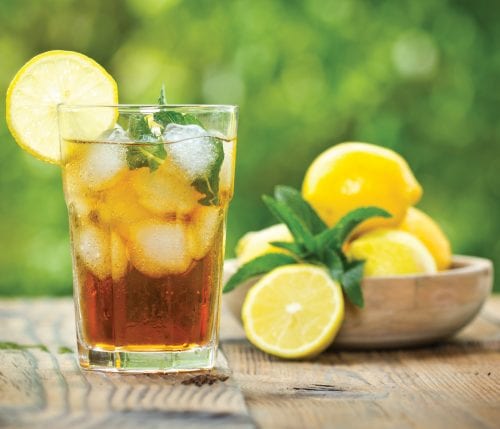 Kombucha is growing in popularity, along with other fermented foods. But how does this fermented tea compare with a regular iced tea?

We’ve shown the nutrition information for a bottle, but note they are different sizes.

Kombucha is a fermented mixture of tea, sugar and water. The health benefits credited to kombucha are due to bacteria and yeasts, shown in animal studies to reduce type 2 diabetes risk, treat gastric ulcers and reduce cholesterol. Fermentation means very little sugar is left in the kombucha, but, sometimes, extra sugar or sweeteners are added to improve the taste.

The Lo Bros kombucha has added sweeteners (erythritol and stevia) that help keep the kilojoules low – three quarters less than the Fuze Tea when we compare 100ml of each.

The Fuze Tea is not fermented. Sugars (sucrose and fructose) are added for taste, rather than to feed bacteria and yeast – meaning it’s higher in energy and sugar. However, this product contains less sugar than other sugar-sweetened fizzy drinks or fruit juice, as it also has erythritol and stevia added.

If you want to boost your gut bacteria and have a lower-sugar drink, then the Lo Bros kombucha is a good option.

Both are fairly large serving sizes, so it would be worth spreading them out through the day rather drinking them all at once.

For more information, see The truth about fermented foods and Try this: Kombucha.