Wine glass size on the rise 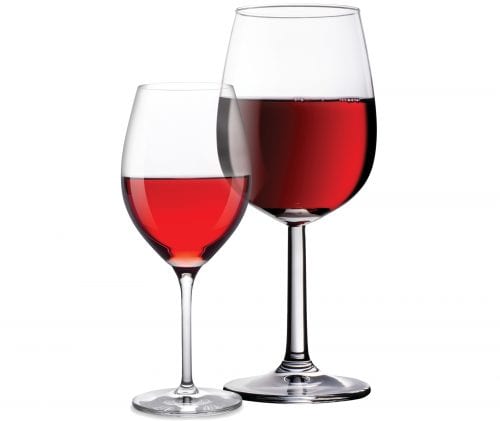 Feel like you’re drinking more wine than you were a decade ago? Larger glasses might be to blame. UK researchers at the University of Cambridge studied changes in wine glass size over time and found that the capacity of wine glasses in England increased from an average of 66ml in the year 1700, to 449ml in 2017 – an almost seven-fold increase.

Researchers can’t confirm the increase in glass size is a direct cause of the rise of wine consumption in England, but say it may have contributed to it.

Could you be drinking more wine than you anticipate? According to a new study, it’s possible because the wine glass you’re drinking from is bigger than you may think.

This is what researchers at the University of Cambridge found when they compared the size of wine glasses over the years, and what they found was that wine glasses today are almost twice the size they were a decade ago.

This, they say, strongly corresponds with how much alcohol we drink.

In fact, glass size has increased seven-fold over the past 300 years.

“Wine will no doubt be a feature of some merry Christmas nights, but when it comes to how much we drink, wine glass size probably does matter,” Theresa Marteau, director of the behaviour and health research unit at the University of Cambridge said in a statement.

“Our findings suggest that the capacity of wine glasses in England increased significantly over the past 300 years, lead author Zorana Zupan said in the statement. “For the most part, this was gradual, but since the 1990s, the size has increased rapidly. Whether this led to the rise in wine consumption in England, we can’t say for certain, but a wine glass 300 years ago would only have held about a half of today’s small measure. On top of this, we also have some evidence that suggests wine glass size itself influences consumption.”

The increase in size could be due to several factors, including changes in price, technology, societal wealth and wine appreciation.

Two changes in the 20th century likely contributed to glasses becoming even bigger. Researchers say this is the time wine glasses were starting to be tailored in both shape and size for different wines, as well as bars and restaurants which expected it would increase wine sales.

The study was published in the British Medical Journal.

According to registered dietitian Tristaca Curley of Fueling with Food, drinking wine in excess has its health consequences.

For example, it can raise blood pressure (as can any form of alcohol), the University of Western Australia found. Drinking in excess can also contribute to obesity, theChildren’s Hospital of Eastern Ontario concluded.

“There may be some benefits from drinking in moderation, below this two to three drink maximum, such as reduced risk of heart disease, gallstones and Type 2 diabetes,” she says. “However, drinking more heavily significantly increases the risk of high blood pressure, stroke, liver disease, dementia and cancer.

The best way to control your wine intake, Curley says, is to be more aware of your portions and your drinking habits.

“Don’t drink because you think it benefits your health, because it may not,” she says. “And don’t think that red wine will benefit your health any more than other alcoholic beverages.”

Use smaller wine glasses too, she adds.

“Research shows that we eat more fatty and salty foods if we start the meal with a drink,” Curley says. “So eat your meal first then have a drink a little later when you are done eating.”

And put your glass down between sips. People tend to drink a lot faster if they’re holding their glass while they socialize, she says.