Behind the science: Alcohol 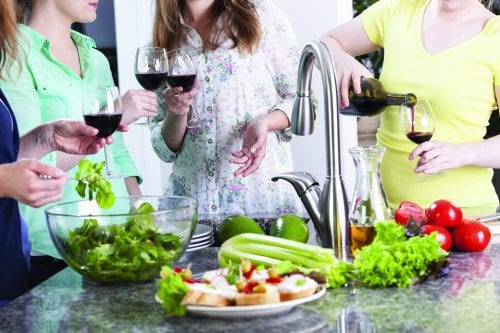 As we head into the festive season, HFG senior nutritionist Rose Carr takes a hard look at the latest research on alcohol.

What’s alcohol doing to my body? What’s the latest research?

The long-term health risk of drinking alcohol is due to the fact that it’s a carcinogen — that is, alcohol is a known cause of cancer. There is a dose-response relationship, which means that one drink is more risky than none, two drinks are more risky than one, and five drinks is a whole lot more risky.

Is there a safe amount for a person to drink?

Not really. When it comes to drinking alcohol there isn’t a no-risk option. Given that many of us do currently drink, the advice from bodies such as the Ministry of Health and the Alcohol Liquor Advisory Council (see Low-risk drinking, below) focuses on reducing our risk of harm from alcohol-related disease or injury, rather than on what’s the best possible thing for our health.

The more alcohol we drink, the higher the risk of developing cancer and other diseases. Heavy drinking can lead to stroke, high blood pressure, pancreatitis and can cause cirrhosis of the liver, which can lead to liver cancer. Regularly drinking alcohol increases the risk of cancers of the mouth, pharynx, oesophagus, larynx, breast, bowel and liver. The flip side is we can reduce (but not eliminate) our risk by reducing our intake.

Even people who have been heavy drinkers can generally lower their health risk by giving up or cutting back on their drinking. Obviously if you don’t currently drink alcohol, it’s a very good idea not to start. And if you’re thinking of giving it away, that’s also a good idea.

Isn’t a little alcohol good for the heart?

It’s long been said that one to two standard drinks (see What’s a standard drink, below) a day helps reduce our risk for cardiovascular disease (CVD), and there is a lot of research that appears to back this up. It’s also a very appealing theory. Many scientists, however, dispute the theory as there are a number of other possible explanations for the association between alcohol and CVD that can’t be ruled out. And contradicting the theory, a large study recently published in BMJ (formerly the British Medical Journal) suggests that reducing alcohol consumption, even for light to moderate drinkers, is actually better for cardiovascular health.

What about red wine? Does it have any health benefits?

For cardiovascular health, drinking wine and beer, and especially red wine, appears to offer more benefit than drinking spirits because of the phenolic compounds found in wine and beer.

There is, however, a view that these benefits may get more attention than they deserve, purely because we all want to hear good news about drinking alcohol. Two things tend to get overlooked when we focus on this:

The benefits are only available to those limiting their intake to between one and two standard drinks each day. Any more than that and we can forget it.
The cancer risk does not change.

If I don’t drink during the week, is it okay to have a big night on the weekend?

Whatever your definition of a ‘big night’ is, the answer is no. In terms of cancer risk it doesn’t appear to make much difference whether you drink it all in one go or a bit at a time.

Researchers often define binge drinking as having five or more drinks in a row for men and four or more drinks in a row for women. Many of the risks associated with binge drinking are immediate — think unsafe sex, falls and vehicle accidents — but it’s also associated with the long-term health risks previously discussed. More immediately, drinking increases our pulse rate and blood pressure, which is linked to stroke. Having more than two standard drinks a day increases our risk of stroke by as much as three times, but a drinking binge is as much as five times riskier. (It’s also possible to drink enough to become comatose and kill ourselves immediately, but that’s more than a ‘big night’.)

Is there a ‘healthy’ drink — is vodka and soda better than wine or beer?

Alcoholic drinks contain compounds called congeners which add to their taste, smell or colour, and they may also make the effects of hangovers worse. Drinks such as brandy, whiskey and red wine contain more congeners than drinks such as gin or vodka, so the latter may not cause such a bad hangover when drunk in excess. The addition of a good amount of soda might also help stave off some of the dehydrating effects of the alcohol. However, while drinking vodka and soda may appear healthier at the time it will still have the same long-term health effects from the alcohol content.

Some studies have looked at whether the association of alcohol consumption on cancer risk varies by the type of drink, and have found broadly similar associations in wine, beer and spirit drinkers. In studies around the world, the most commonly consumed drink tends to be the one associated with the highest risk.

How to drink less when others are drinking more!

It is possible to drink at a level that is less risky and still have fun. It just means a bit of forethought/planning ahead so we don’t get caught out.

When you go out:

When you’re the host:

Reduce long-term health risks by drinking no more than:

NOTE: There is no known safe level of alcohol use at any stage of pregnancy.

The alcohol content of different drinks varies so check the label to see how many standard drinks it contains.

As a rough guide: 1 standard drink =

A standard drink is smaller than many of us imagine. It’s worth measuring 100ml water into a wine glass to see for yourself.