What really happens when we drink? 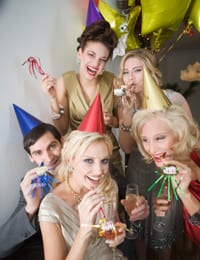 When the Christmas decorations start to go up in early November, it feels ridiculous – Christmas is months away, right?

But now here we are and we’re on the downhill slide to the holidays, the kids finish school in a couple of weeks, and then all of a sudden it’s Christmas Day. Between now and then, if you’re anything like us here at Healthy Food Guide, you have about a thousand things to get done. Oh, and then there are the parties and get-togethers to go to on top of that. It’s no wonder we feel that a glass or two of wine or a couple of beers are just what we need at the end of a full day.

We’re often told that enjoying a glass of wine is a heart-healthy habit. But then we hear about research that drinking increases your risk of high blood pressure and cancer. Likewise, while some studies show that moderate drinking can actually improve bone density, others say that alcohol consumption can make osteoporotic fractures more likely. With so much seemingly conflicting information, it’s easy to forget all that and just reach for a refill. So why not?

Alcohol is our most commonly-used recreational drug, and I think it pays to think of it like any drug – something to be treated with respect. Unlike other drugs though, alcohol also packs an energy punch. I’ve found what helps me to keep the alcohol intake moderate is knowing that those three glasses of wine are equivalent in kilojoules to 6 1/2 slices of white bread; pretty compelling when you’re contemplating glass number four. It is also useful knowing what happens in my body when I drink.

After that moment on the lips, the body starts reacting in a number of ways.

After five minutes, the alcohol reaches your brain, where it starts to exert its intoxicating effects – the first of which manipulates the area of your brain that controls inhibitions and judgement. Even this early, there’s enough alcohol in the blood to measure.

After 20 minutes, the alcohol reaches your liver – the organ that’s responsible for metabolising more than 90 per cent of the alcohol you consume. The liver starts to break down the alcohol, neutralise it and, eventually removes it from the body. After 45 minutes, assuming you’ve just had the one drink, your blood alcohol concentration (BAC) will peak. Your BAC will continue to rise with the more alcohol you consume.

After one hour, just 10g of alcohol has been metabolised by the body, the amount that’s contained in one standard drink. This means that if you drink three standard drinks in one hour, your blood alcohol concentration won’t peak until at least 45 minutes after your last drink, and it will take at least three hours after your last sip until your body has completely metabolised the alcohol, depending on a variety of factors, including your age and gender.

There’s a good reason why women are usually advised to drink less than men – it takes less alcohol for women to reach the same blood alcohol concentration. Women are typically smaller, but it also actually takes longer for the average female body to process alcohol. Why? A woman’s body contains more fatty tissue and less water than a man’s. Because alcohol is water soluble, it’s cleared more rapidly from the blood of a person with a higher body water content.

At Healthy Food Guide, we believe in the old adage of everything in moderation. We are known to like a tipple ourselves! So we wouldn’t say ‘don’t drink’ at a festive occasion if you want to. But we do say try and keep it moderate. We think the guidelines of no more than two standard drinks on any day, and having a minimum of two alcohol-free days each week, are pretty good. That can be a challenge at this time of year but if you can do it, your body will thank you when the New Year rolls around.