Think before you drink: How to beat a hangover 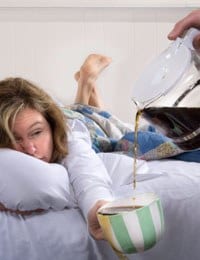 Unfortunately, a hangover is something most of us have experienced. Is there anything we can do to make the morning after less painful?

Often accompanied by regret, a hangover is the unwanted companion of too much alcohol. The technical term for a hangover is 'veisalgia', coming from the Norwegian word 'kveis' meaning 'uneasiness following debauchery' and 'algia', the Greek word for pain. A fairly apt description for a far too common experience many of us would rather not repeat, but do with regular monotony. As we journey through the festive period of Christmas and New Year, with its unusually high quota of parties and big nights out, is there anything we can do to make the morning after less painful?

Why do I feel so bad?

Understanding what causes hangovers, other than the obvious, gives us a few clues as to the best way to avoid them, or at least lessen the blow and aid recovery.

It hardly seems necessary to remind ourselves of hangover symptoms, but the most common include headaches, tiredness, nausea, red eyes, dehydration and trembling. These are due to the direct effect of alcohol, the body's processing of it, alcohol withdrawal, or other substances within alcoholic drinks.

The headache or dry mouth suffered with a hangover is your body's plea for water. Alcohol causes dehydration by preventing the kidneys from conserving water. Consequently, we can produce up to four times as much liquid as we take in. In order to replace the lost water in its vital organs, the body takes water from the brain, making it cry out in pain. Along with this water go the electrolytes sodium and potassium, made worse by any accompanying vomiting and diarrhoea, which can cause weakness and dizziness. Such light-headedness, shakes and sweating can also be caused by a drop in blood sugar, due to alcohol's effect on the liver. Nausea, vomiting and diarrhoea are how the body copes with alcohol's irritation of the stomach lining and increased acid production.

As well as causing these direct effects, a highly toxic substance is produced during alcohol's breakdown in the liver. We remain largely unaware of it when only enjoying a glass or two, but during longer drinking sessions, levels of this toxin build up. The familiar symptoms of sweating, flushing, nausea and vomiting can all be attributed in part to this potent toxin. Some people are unable to remove this toxin as efficiently as others, leaving them much more susceptible to feeling rough after just a couple of drinks, and with worse hangovers. Women are also more prone to severe hangovers than men, even when drinking the same amount. Not only are men usually larger than women, but they have more efficient stomach enzymes to breakdown the alcohol.

Although you might expect to sleep soundly after a night's drinking, many of us don't. Alcohol may appear to give us a buzz in the short-term, but it actually has a depressive effect. The body then over-compensates as the level of alcohol in the blood falls, giving lighter, less restful sleep. That's why when we most need a good night's sleep, it often eludes us and we feel drained in the morning. This can be made worse by a partner snoring as the alcohol relaxes their throat muscles, enabling them to give it full throttle!

Have you ever noticed a hangover is worse after drinking certain types of alcohol? Red wine is a common culprit as darker drinks contain more congeners. These are impurities produced during the production or ageing of a drink, contributing to its taste, smell and appearance. Levels are higher in drinks such as red wine, whiskey, brandy or tequila and lower in white wine, vodka and gin. One of these congeners is methanol. The products of methanol processing are highly toxic to the body and levels increase after blood alcohol has fallen. Mixing congeners can also make hangovers worse. As the saying goes, don't mix grape and grain: what you drink is as important as how much.

Now we have some idea why we are feeling so rough, what can we do to make it less painful?

'Lining' the stomach. If you know you're going to be drinking alcohol, don't go out on an empty stomach. Some alcohol is taken up through the stomach wall, so with food in its way it takes longer to reach the blood and take effect, giving the body more time to process the toxins. Many people think a good fry-up the morning after is the ultimate cure, but it might be better enjoyed the night before as fatty foods take longer to leave the stomach.  A greasy pizza or curry is probably just as good.

Drink plenty of water. Trying to stay hydrated is a major factor in reducing hangover symptoms, and water and alcohol are two drinks you can mix successfully. Try to drink a glass of water with each alcoholic drink, plus some more before going to bed.

Choose carefully. Choose the lighter-coloured drinks with fewer congeners, ie. white wine, gin or vodka. Using fruit juice, containing fructose, as a mixer may help reduce the severity of a hangover. There is some evidence to show fructose increases the rate of toxin removal. Obviously alcohol content is also important.  One standard drink contains 10g alcohol, found in 100mls table wine, 30mls spirits or 330ml beer. Generous home measures of spirits and the varying strengths of table wines can increase these amounts, catching us unawares.

Pace yourself. The body takes at least an hour to process each drink, often longer in women.  The slower you drink, the less build up of toxins.

Okay, so you didn't do any of the above, you have the hangover from hell and you are due to chair a session at a major scientific conference in a couple of hours. This was the situation I found myself in a couple of months ago. So what could I do to help myself? After starting the day with the requisite cup of tea and a couple of glasses of water, I headed off for the nearest café and tucked into a hearty breakfast. As nausea is always my main hangover symptom, eating is not the easiest pastime, but the cornerstone of my recovery.  Here's why:

Breakfast. However nauseous you are feeling, breakfast is essential to begin rebuilding the nutritional damage left behind in the alcoholic wake. Having established a good fry-up might be better before drinking, there is still some benefit in a cooked breakfast involving eggs during the 'recovery period'.  Eggs contain cysteine, which helps in the breakdown of toxins. Fruit, packed full of vitamins and fructose, provides another good start to the day. Together with breakfast cereal, fruit will also help stabilise blood sugar levels. If food appears impossible however, try a fruit smoothie or milkshake instead.

Keep drinking. No, not the 'hair of the dog' approach, but more water.  Replacing lost water is crucial, and with it those lost electrolytes and sugars. Fruit juice or sports drinks are worth a try, and will provide the essential vitamins lost in the bathroom the night before.

In some ways, if hangovers didn't rear their throbbing heads with such ferocity, more of us might be drinking far too much; perhaps they are a good warning sign. Visual and spatial skills are impaired long after alcohol can be detected in the blood. Judgement, co-ordination and the simplest of tasks can become surprisingly hard. Just as we shouldn't drink and drive, also avoid driving with a hangover.

There is no quick cure for a hangover, it simply takes time, so prevention is always better.  'Tis the season to be jolly, so let's see if we can extend that Christmas cheer to the morning after as well as the night before.

American Indians eat almonds, Africans peanut butter, and many of us will have our own ways of preventing or coping with hangovers. But what are some of the more popular remedies, and do they work?

Hair of the dog
A theory based on an old Scottish practice of treating dog bites with hair from the offending dog. It's the alcoholic version of homeopathy; a little of what is causing the illness can relieve it. Indeed, it can seem beneficial as alcohol prevents the release of toxic by-products from methanol breakdown. Sadly, it's only a delaying tactic, the inevitable hangover will happen eventually.

Burnt toast
Some forms of charcoal can filter out poisons and are used for just that purpose. Unfortunately, this 'homemade' version is not really comparable to those medicinal products: burnt toast produces the wrong kind of charcoal.

Banana
Yes, potassium-rich fruit, such as bananas, oranges and kiwifruit are important for replacing lost electrolytes.

Black coffee
Caffeine found in coffee, tea and cola drinks is a stimulant and so a strong coffee the morning after is often the drink of choice. It is, however, also a diuretic, so can make dehydration worse. If coffee or tea is your lifeline, drink plenty of water as well.

Supplements eg. Berocca, Hairy Lemo
These are another way of replacing lost nutrients. Not essential, but a quick and easy prop in a time of need.

Bloody Mary
While tomato juice is an important source of fructose as well as some of the essential nutrients lost the night before, leave out the vodka. More alcohol is not your best long-term plan.

Raw egg
The cysteine in egg is its secret ingredient for hangovers, but don't eat it raw. The last thing you need is food poisoning on top of a hangover!

Those dry Martinis did the work for me:Last night at twelve I felt immense,Today I feel like thirty cents.My eyes are blurred, my coppers hot,I'll try to eat, but I cannot.It is no time for mirth and laughter,The cold, gray dawn of the morning after.