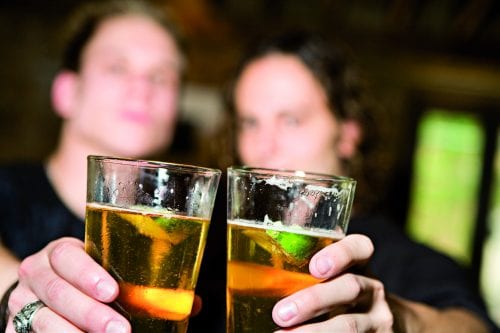 Weight-loss expert Andrew Dickson has advice for men on a favourite topic: beer.

Beer is a problem for men. It's as simple as that. It's the average bloke's socially acceptable way to catch up with a mate, or relax after mowing the lawns. It's the main feature of Friday afternoon 'beer-o'clock'. I got suckered in by this social norm when I was overweight – I drank beer every day and extra on the weekends.

I still love beer – most varieties, and most blends. It's refreshing, cool and easy. What really irks me, though, is that it counts as kilojoules – exactly like eating food. If we add up the amount of energy in a six-pack of an average lager, it equals about 3500kJ. This is about a third of my daily energy allowance, and lads – you can't skip dinner and have a six-pack instead. It just doesn't work that way.

The problem with beer (in fact, all alcohol) is that it delivers energy (kilojoules), but no nutritional value. Drink too much and you become dehydrated and wake up with the hangover headache and dry mouth.

The good news is that our bodies are able to cope with some alcohol, as long as we manage our intake.