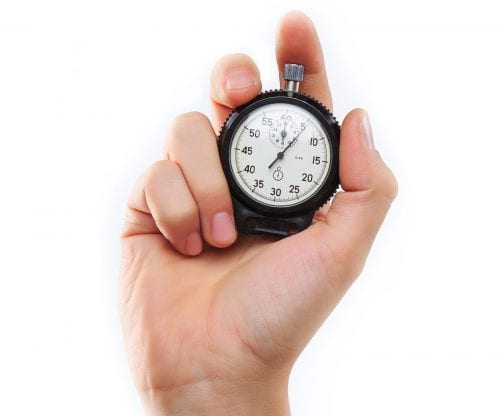 Are you a speed eater? Tim Crowe explains why slowly savouring each mouthful could be the secret to lasting weight loss.

Do you enjoy every bite or are your mealtimes a race to shovel food down as fast as possible? If it’s the latter, you might want to pay attention to new research that finds quick eaters are not only likely to be heavier, but they are also likely to have more health problems.

One of the problems of modern living is that we tend to rush through the day, with little heed to enjoyment of food. This type of lifestyle gives a whole new meaning to the term ‘fast food’.

In recent times, ‘speed eating’ has attracted the attention of nutrition researchers. In 2017, Japanese researchers looked at how the speed of eating could influence body weight and future risk of metabolic syndrome, a combination of disorders that increases the risk of heart disease, diabetes and stroke. The study tracked the health and eating habits of around 1000 adult men and women over a five-year period. Based on self-assessment, the participants were divided into three groups, depending on whether they considered themselves to be slow, normal or fast eaters.

At the end of the five years, slightly more than 11 per cent of the fast eaters had developed metabolic syndrome, compared with 6.5 per cent of the normal group and 2.3 per cent of the slower eaters. Faster eating speed was also linked to a higher risk of weight gain, greater waist circumference and a more adverse blood lipid profile.

The Japanese findings support previous short-term laboratory studies – that quick eaters feel less full at the end of a meal and, therefore, are more likely to overeat later.

Scientists have known for some time that a full stomach is only part of what causes us to feel satisfied after a meal. It takes time for mechanical and hormonal signals to reach the brain from the stomach to tell us we’re full, so eating slowly allows this feedback system to work properly. Eating quickly also causes greater fluctuations in blood glucose, which can lead to insulin resistance.

The benefit of chewing well was illustrated in a 2014 study where people were asked to change the number of chews for each bite of their food. Those who doubled the number ate 15 per cent less in a meal. Even with less food eaten from more chewing, subjective feelings of ‘fullness’ at the end of the meal were the same as for people who ate more food, but with fewer chews.

How fast is too fast? Around 20 minutes is considered a minimum amount of time to eat a main meal, but eating slowly is easier said than done, especially if you have been a fast eater for most of your life. Follow these five simple tips to help you slow down and stay healthy.

Five tips to slow down