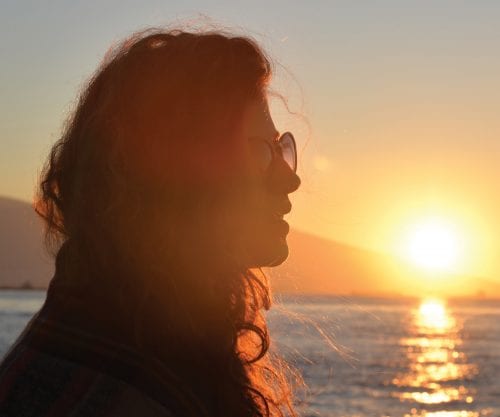 Healthy Food Guide editor Jenny de Montalk talks to psychiatrist Mark Lawrence about being resilient in the face of one of our most common mental illnesses.

Everyone feels sad or low from time to time, especially when life throws us its inevitable curveballs. We grieve loss, rage at injustice, mope when we’re bored, and sometimes feel so low in energy we don’t feel like doing anything at all. Then there are days when we actually derive pleasure from melancholy. All of this is perfectly normal.

But, when feelings of sadness and disinterest in things you used to enjoy don’t subside, you may be suffering from clinical depression.

According to the World Health Organization, depression is an illness ‘characterised by persistent sadness and a loss of interest in activities that you normally enjoy, accompanied by an inability to carry out daily activities, for at least two weeks’.

Depression is common, serious and treatable. According to the last New Zealand Health Survey, 14 per cent of Kiwi adults have been diagnosed with the illness at some point in their lives – that’s close to half a million people.

Tu Te Akaakaroa (Royal Australian and New Zealand College of Psychiatrists) chair Mark Lawrence says for depression to be diagnosed as more than just a normal emotional response, your symptoms must reach a ‘clinical threshold’ or set of criteria (see below).

Anyone across society can develop depression, Dr Lawrence says, but rates vary by gender, age, wealth and ethnicity.

For instance, in New Zealand more women than men have been diagnosed with depression at some point in their lives – 17.9 per cent compared with 10.4 per cent.

Dr Lawrence suggests this difference could, in part, be down to men being reticent about seeking help. Unfortunately, admitting to struggling emotionally is still viewed by some men as weakness.

Work being done in the mental health space by the likes of former All Black John Kirwan, the Like Minds, Like Mine awareness campaign, and mental health advocate Mike King, are going some way to break barriers for men seeking help, he says.

Worryingly, Maori males over 15 years of age have the highest probability of anxiety or depressive disorders, followed closely by Maori females, then non-Maori females and males (9.6 per cent, 9.5 per cent, 7.6 per cent and 4.5 per cent respectively).

The causes of depression are diverse, but solid evidence from family, twin and adoption studies shows 30-40 per cent of major depressive disorder risk is genetic, although no specific gene or gene and environment interaction has reliably been identified so far.

Over a two-week period, you need to experience at least five of the symptoms below, and they cannot be explained by a psychotic disorder, manic episode, drugs or a medical condition. And one of the five symptoms has to be either depressed mood or loss of interest or pleasure in activities.

Additionally, symptoms cause clinically significant distress or impairment in social, occupational, or other important areas of functioning.

How is depression treated?

Different treatments are appropriate depending on the severity of a person’s depression. Generally, depression is categorised as mild, moderate or severe.

Talking or online therapies, such as cognitive behavioural (CBT), problem solving (PST) or interpersonal (IPT) therapies, are a great option to treat mild and moderate depression.

A combination of talk therapies and medication is best practice in treating severe depression.

Therapy can help a person with depression cope with feelings and symptoms, and it can change the behaviour or thought patterns that potentially contribute to the illness.

Therapists offer a compassionate ear, validate your feelings and arm you with a whole lot of tools to face the world in a healthier way.

Depression is associated with deficiencies in neurotransmitters such as serotonin, dopamine, noradrenaline, and gamma-aminobutyric acid (GABA).

Neurotransmitters help send messages between nerve cells to control body processes, such as sleeping and breathing, and regulate mood, sleep and concentration.

Serotonin helps with mood stability, sleep, cravings and even digestion, while dopamine helps with focus and motivation.

In addition to these treatments, maintaining a healthy diet and exercising regularly can help alleviate symptoms.

There are numerous studies pointing to food and mood relationships, but more research is needed to find direct causal links.

Deficiencies in some nutrients potentially increase depressive symptoms. A 2000 study published in the American Journal of Psychiatry found physically disabled older women with vitamin B12 deficiency had a two-fold risk of severe depression.

While more investigation is needed, Dr Lawrence says a nutrient-dense diet is beneficial for physical well-being, and being healthy physically helps mental health.

B vitamins: Vitamins B6, B12 and folate help maintain the body’s production of neurotransmitters. Eat potatoes, salmon, chicken, broccoli and bananas for B6. Choose meat, fish, eggs and dairy for B12 (or take a supplement if you’re vegan), and add strawberries, spinach, broccoli, oranges, legumes and whole grains for folate.

Toxic relationships, drinking too much alcohol, using drugs or not living within your financial means all contribute to a chaotic existence – fertile ground for depression.

If you tend to take on too much, learn your limits and when to say no or ask for help. Take time to regularly unwind by exercising, meditating, having a warm bath or reading a good book.

People with depression and other serious mental illnesses are at increased risk of poor physical health. Prevalence of cardiovascular disease in people with depression is 1.5 times higher than that of the general population. The risk of heart disease is at least two times higher. People with serious mental illness also have a higher risk of respiratory disease, viral infections, poor dental health and some cancers. Promote good health by eating a varied, nutrient-dense, plant-based diet, exercising regularly, limiting alcohol and avoiding smoking.

Studies have found the presence of close, intimate, supportive relationships protect against depression, while relationships that are full of conflict or dysfunction impair your ability to cope with stress.

If you are depressed or just recovering, put off big life-changing decisions until you feel happier and more stable. Big decisions are big stressors. If you can’t put it off, ask for advice from someone you trust.

A hopeful outlook can enhance your sense of control and ability to cope. Studies done with natural disaster victims showed CBT strategies focusing on optimism had beneficial effects on overall well-being.

How you can help someone with depression

If someone you know has depression, the best thing you can do for them is be supportive. Being supportive means validating their feelings, rather than trying to tell them how they should be feeling.

This can be tricky, especially when you don’t understand why someone seems so negative or seems to be making a bigger deal of a situation than you think is appropriate.

The thing to remember is a person with depression is ill. It’s not a condition you can see, like chicken pox or a broken leg, but it is just as real. It’s unlikely you’d tell a person with a broken leg they would feel better if they’d just went for a run but, often, that’s the sort of thing we say to people who are depressed. Telling someone to just ‘cheer up’ or ‘think positively’ is really unhelpful. The best way to help is by listening. That means zipping up and just letting the person talk as much or as little as she wants to, without offering ways to ‘fix it’ or pointing out why she’s wrong.

Don’t be afraid to ask someone if he’s OK. Sometimes it can be hard for a person with depression to reach out for help. Depression can make a person acutely self-critical and often he’ll view himself as a burden, so letting him know you’re there if he needs you will give him somewhere to turn.

Where to seek help

If you or someone you know might have depression, visit a GP or contact one of these support services:

According to the last New Zealand Health Survey, 14 per cent of Kiwi adults have been diagnosed with depression at some point in their lives.