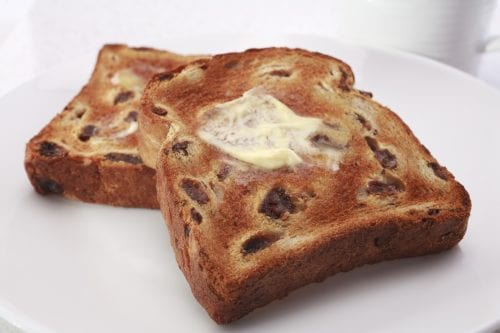 Senior nutritionist Rose Carr finds healthier spreads for the table and for baking.

While butter and butter blends are available, at Healthy Food Guide we prefer the healthier reduced-fat spreads made from plant oils: canola, rice bran, olive and avocado oils are our preferred oils for their balance of polyunsaturated fats and monounsaturated fats. But don’t be too concerned with the names on the spreads. While Alfa One rice bran oil spread does not contain any oils other than rice bran oil, most of the olive oil spreads will contain a blend of oils. Cost is likely to be the driving factor. The olive oil content in ‘olive oil’ spreads is between 14-16 per cent and the ‘avocado oil’ spread we bought contains 14 per cent olive oil and 7.5 per cent avocado oil. Some spreads contained other unspecified vegetable oils in addition to the named oils – which just goes to show when you are choosing a spread, it pays to check out the nutrition information panel and the ingredients list if you want to be fully informed.

Step away from the butter

Butter, at around 80 per cent fat and 50 per cent saturated fat, has traditionally been a significant source of artery-clogging saturated fat in New Zealand diets. If we regularly use a spread at breakfast and in baking, changing to one with much less saturated fat is a simple, healthy change.

A spread made of butter blended with canola oil, such as Tararua Super Soft Lite or Anchor Country Soft Lite, or Flora buttery with 10 per cent buttermilk may help to wean yourself off butter. These are a lot healthier at 17 to 22 per cent saturated fat. Ultimately, though, we recommend choosing a lower-fat spread with less than 15 per cent saturated fat.

While many baking recipes probably specify butter, in our recipes we always use a reduced-fat spread to reduce the amount of saturated fat. Most of the time you can use reduced-fat spread instead of butter in your recipes and you shouldn’t notice a difference in taste or texture. A safe guideline is to use a spread with around 60 per cent fat, as less fat may not always work in baking.

If a spread doesn’t contain butter you can assume it’s virtually ‘cholesterol-free’ – even if it doesn’t make a big deal of it on the pack. But remember: limiting saturated fat in our diets is the key to not increasing our blood cholesterol levels.

You will pay more for a plant sterol spread but for people with high cholesterol, studies have shown that spreads enriched with plant sterols can help reduce LDL cholesterol (the bad kind). For spreads such as Logicol and Flora pro-activ (containing 8g plant sterols per 100g) you need about 5 teaspoons of the spread each day to get the effective amount of plant sterols. If you’re having that much, we think it makes sense to go for a lower-fat spread such as Flora pro-activ ultra light, with only 23 per cent fat. Given many people with high cholesterol also need to watch their weight, this is a good low-kilojoule option. If you’re on medication for your cholesterol talk to your GP before using a plant sterol spread.