Food and migraines: Understanding the links 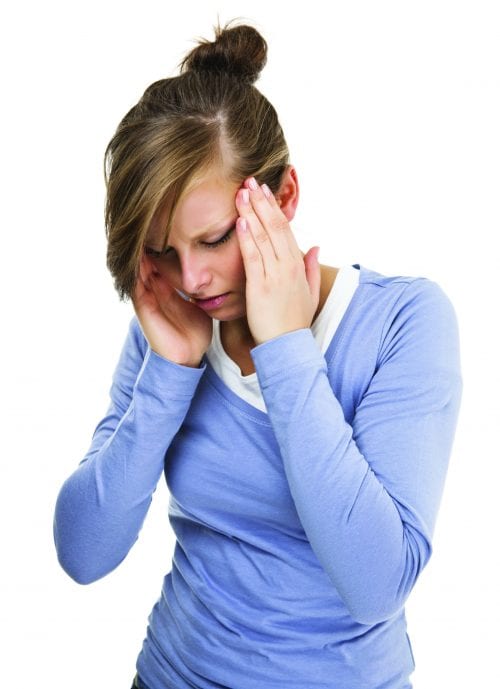 That splitting pain in your head can involve anything from carb cravings and thirst to skipped meals. Stephanie Osfield gives you the heads-up on the food-migraine connection.

Flashing lights appear before your eyes. Within minutes, they cover one side of your vision, as though a private laser show is screening inside your head. You sigh with grim anticipation: here comes another migraine.

As you take several painkillers, you notice the onset of migraine aura, a clutch of telltale symptoms that includes numbness in your face and tingling in your arm, all the way through to your fingers. Fast-forward 30 minutes and you have blurred vision and intense pain moving over the top of your scalp and forehead. In 50 minutes, you’re lying in a dark room with acute nausea, your head throbbing with pain as though you’re being stabbed with an ice pick.

Watch someone grappling with a migraine and it’s easy to see why migraines figure in the top 10 disabling medical conditions worldwide.

“Migraines are headaches that can last from four to 72 hours,” explains Gerald Edmunds, CEO of Headache Australia.

“Unlike tension headaches (which cause mild to moderate pain), migraines often send people to bed. They may also involve nausea, visual disturbances and vomiting.

It’s thought around 17 per cent of women and six per cent of men suffer from migraine. Experts blame the higher female rate on hormones.

“Migraines can be very debilitating; its impact can affect a person’s career, social connections and ability to enjoy life,” says Richard Stark, an honorary clinical associate professor in the Faculty of Medicine, Nursing and Health Sciences at Melbourne’s Monash University.

“However, we still understand only very little about what’s happening in the brain in relation to the symptoms and triggers of a migraine.”

What cravings can mean

“The brain and body react to temperature, odours, hormones, exercise, alcohol consumption, withdrawal from daily painkillers and withdrawal from daily caffeine, all of which are well-established migraine triggers,” explains Stark. For several days or hours before a migraine, you experience changes in taste perception, which can lead to you either avoid or strongly crave certain foods.

“These cravings are often for sweet foods, such as chocolate, or starchy carbohydrates, like sweet biscuits,” says Stark. “You may mistakenly think these foods are triggers, when in fact your craving them may signal that migraine is on its way.”

Could these cravings be a form of self-medication?

“Though we don’t fully understand the relationship between food and migraine, it’s not unreasonable to think that the brain might be trying to stabilise its chemistry through food cravings,” says Stark. This may explain why some cravings kick in one or two days or several hours before a migraine.

These cravings can be accompanied by other warning signs, which range from constipation and low mood to neck stiffness, hyperactivity and yawning.

“In the lead-up to migraine, some people yawn excessively, and yawning is linked to the pathways of the brain chemical dopamine,” explains Stark. “Dopamine itself is linked to appetite, so it’s possible that this brain chemical is also related to food cravings.”

In some people, the brain may also be trying to boost levels of the feel-good chemical serotonin.

“My research suggests that food cravings, which also occur alongside conditions such as premenstrual syndrome, alcohol withdrawal and seasonal-affective disorder (SAD), indicate low serotonin activity in the brain,” explains nutritional biochemist Judith Wurtman, PhD. (Wurtman spent 15 years engaged in groundbreaking research into the way food influences brain chemicals and mood at the Department of Brain and Cognitive Sciences at Massachusetts Institute of Technology in the US.)

“Research and animal studies show that consuming carbohydrates (often in the form of sweet or starchy foods) increases serotonin levels, which can subsequently improve mood,” says Wurtman. “The body digests sugar faster than it does, say, rice or wholemeal bread. Consequently, this means a longing for sugar may be based on an unconscious desire to eat something that will quickly make the person feel better by balancing his or her brain chemistry.”

“People who suffer from migraine have different food triggers, so we advise them to keep a food diary to assess whether any foods clearly lead to migraine onset,” says Clinical Associate Professor Armin Mohamed, a neurologist at Sydney’s Royal Prince Alfred Hospital. “The food triggers that most people have heard about, such as cheese and chocolate, are high in tryptophan, an amino acid that boosts the production of serotonin and dopamine, brain chemicals that affect mood.”

According to Mohamed, we tend to think of serotonin as the beneficial ‘happiness hormone’ because many antidepressant drugs boost serotonin levels; however, “foods that increase serotonin levels may contribute to migraine in people who are sensitive to serotonin,” explains Mohamed. This is why some migraine drugs help block serotonin.

“The food–migraine link is not straightforward, as it differs for every individual.”

Health professionals have long thought that dehydration triggers migraine. The previous theory was that lack of fluid caused the blood to thicken, prompting the brain’s blood vessels to dilate, thereby increasing the flow of blood and oxygen. However, scientific research has since overturned this theory. Many neurologists now believe that the excessive thirst that some migraine sufferers report in the days or hours before an episode is part of the cluster of warning signs that precede a migraine.

“Over the past decade or so, evidence has indicated that migraine aura is due to changes in the function of nerve cells in the brain,” says Dr Jon Simcock, a neurologist and medical adviser for the Neurological Foundation of New Zealand. “These changes cause the nerve cells to become overexcited and overreact, and this triggers migraine symptoms such as flashing lights.”

This excitation spreads like a wave over the brain areas that are involved with functions such as vision. “After overworking those brain cells, this electrical wave then leaves a ‘blank spot’ — an area of depressed function where the same cells underperform for a while,” explains Simcock.

“In contrast, neurologists now think that migraine itself results from an irritation of the nerve cells in the walls of the brain’s arteries. This irritation causes inflammation that leads to intense head pain. However, we still don’t completely understand how or why migraine triggers provoke this irritation.”

The fast track to a migraine

Have you ever given breakfast a miss to make the bus, only to find yourself nursing a pounding headache by mid-morning? For some people, a skipped meal can prove a potent migraine trigger in much the same way.

“This could be due to the drop in blood-glucose levels, which causes a stress response,” says Stark. “Next, adrenaline levels rise, resulting in a cascade of other hormonal events, such as a change in the body’s levels of natural steroids, which may also contribute to migraine episodes.”

According to Mohamed, the big issue is that the brain relies on glucose for 90 per cent of its energy. “When you skip meals and fast for hours, your body can release ketones, chemicals that alter the brain’s acid balance. Although minor, this change can be enough to trigger the release of other chemicals that bring on migraine,” he explains. “Even a slight change in the pH level or acidity of brain fluid could affect, for example, the way the body metabolises and uses calcium, which may contribute to migraine in some individuals. However, scientists have not yet studied this relationship to migraine.”

The take-home message? If you suffer from headaches, migraines in particular, enjoy regular meals, preferably those that contain high-fibre foods, as these help stabilise the body’s blood-glucose levels.

Choose foods that head off headache

When women who suffered from migraine aura ate foods fortified with folic acid for six months (as part of a recent study at Queensland’s Griffith University), they enjoyed a 14 per cent reduction in migraine severity. According to lead study researcher and dietitian Sarah Ingle, that’s good reason for migraine sufferers to “eat more leafy greens (such as spinach, kale, broccoli and Asian greens) and to add more legumes (such as lentils, chickpeas and a variety of beans) to salads, soups and stews. It’s also important for migraine sufferers to eat wholegrain breads and breakfast cereals, preferably those fortified with folic acid.”

Though Ingle and colleagues studied only women, other research suggests that high-folate foods and B vitamins can also benefit men who suffer from migraine. “Foods high in these nutrients are also good for bowel health, fibre intake and weight maintenance, so they have many other health benefits besides their ability to reduce migraine episodes,” adds Ingle.

Did you know? Migraines can last from four to 72 hours… and figure in the top 10 most disabling conditions worldwide.

Did you know? For several days or hours before a migraine, it is not uncommon to experience changes in taste perception, which can lead you to either avoid or strongly crave certain foods.

Did you know? Eating foods high in folate and B vitamins — such as dark leafy greens — can benefit those who suffer from migraines.

Did you know? A skipped meal can prove a potent migraine trigger.