It’s spring — time for the sniffles! 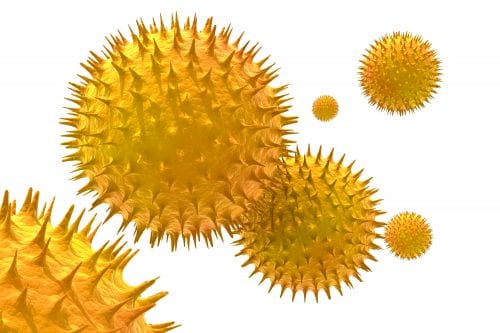 Each day lately when I come out of the house my car is covered in a fine mist of what looks like yellow dust. I haven’t been off-road or been lazy with the car cleaning — it’s pollen, signalling the start of the hay fever season, when otherwise healthy people start sneezing and sniffing.

Even I – not prone to hay fever – have been sneezing lately. Allergy New Zealand reports it’s an earlier pollen season than usual due to the milder winter we’ve had, along with particularly windy conditions. Good news for those of us who hate the cold; bad news if you’re prone to allergies.

Pollen from trees and grasses is inescapable, even when we live in cities; pollen can be carried by the wind as far as 4000 kilometres, reaching city- and country-dwellers alike.

Allergic rhinitis (hay fever) is a form of allergy affecting around 20 per cent of the population. Just as with other allergies, the body’s immune system overreacts to something. A substance which for some is benign, the allergic person’s immune system sees as a foreign invader. In the case of seasonal allergic rhinitis, this could be pollen from any number of trees or grasses, and symptoms range from mildly itchy nose and eyes to full-on sneezing attacks and general misery. It’s common knowledge that it’s usually only bad during the spring pollen season, and things calm down once summer rolls around. However, according to Allergy New Zealand, 50 per cent of patients experience symptoms for more than four months of the year, and 20 per cent have symptoms for at least nine months per year.

There’s an interesting link with other allergies, too. In a phenomenon that’s been termed the ‘allergic march’, children who are prone to one allergy can go on to develop other allergies, including hay fever. It may start with eczema as a baby, then move to a food allergy, then rhinitis, then asthma. Sometimes they develop cumulatively. Often people will grow out of allergies that develop in this pattern. Allergy researchers are looking at how understanding the allergic march might help them develop ways of preventing allergies from developing in children.

As with any allergies, avoiding exposure is the best approach. Allergy New Zealand offers these tips: