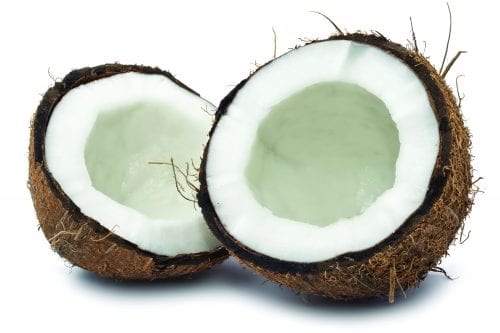 Guide to coconut milk – When a coconut is opened it contains coconut water and white flesh. The water is an almost clear juice, and the flesh can be referred to as the meat. Coconut milk and coconut cream are made from the flesh of the coconut.

To extract the milk and cream, coconut flesh is ground to a fine pulp and the juice separated from the pulp, often by pressing. Water is commonly added to the pulp prior to pressing. When left to settle, the fluid separates into a higher-fat cream and a lower-fat milk. Reduced-fat products have a higher water content. Coconut cream and coconut milk may be homogenised: the fat globules are broken up into smaller particles so they disperse evenly. The texture is smoother and the cream does not separate in homogenised milk/cream. Stabilisers and thickeners are sometimes added.

The main nutrient in coconut milk and coconut cream is fat which means it can pack a punch in terms of kilojoules. Coconut cream can contain between 800-1200kJ in just 100ml and coconut milk 750-1000kJ per 100ml. The amount of fat varies widely between different brands, from 14-29 per cent, excluding reduced-fat varieties, so it can be a trap if you don’t check the nutrition information panels.

A very high proportion of the fat in coconut milk and coconut cream is saturated fat: in the products we surveyed saturated fat accounted for between 60-93 per cent of the total fat. Current dietary recommendations advise us to limit our intake of saturated fats to reduce the risk of cardiovascular disease.

While scientists continue their debate on specific saturated fats, we might be better to err on the side of caution. And we do know that carrying excess fat, especially around our middle, is not good for our health. So while coconut milk or coconut cream can be an enjoyable part of our diet, it is probably a good idea to practise moderation.

One of our favourite products is Trident Light Coconut Milk in the 165ml can. Not only is this the lowest energy and lowest fat of the coconut milk and coconut cream products we found, the small portion size makes it hard to overdo it. It’s ideal if you’re preparing a meal for two to three people and could be stretched to four serves. Often it’s the flavour we want rather than extra liquid. For six serves, you will probably need the 400ml can.