How do they make honey? 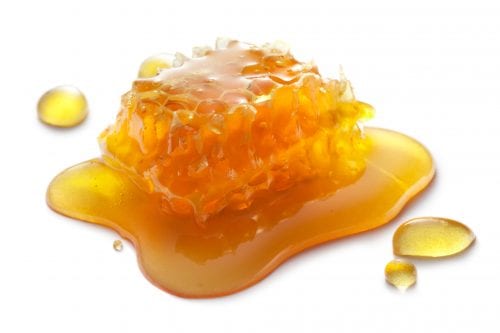 HFG senior nutritionist Rose Carr explains how the nectar from plants ends up as honey.

The birds and the bees

We all know that bees make honey but the honey story starts with plants. In order to produce fruits and seeds, plants need to be pollinated. While some plants are self-pollinating, most rely on other means: the wind, butterflies, birds, bees and other insects that transfer pollen from plant to plant. Bees are especially important in the pollination process.

Plants produce nectar which attracts bees and encourages them to move from flower to flower. Bees use their long tongue-like proboscis to reach in and suck up the nectar from flowers then deposit it into sacs on their bodies for transportation back to the hive. Bees visit around 50-100 flowers during each trip from the hive.

Back at the hive, bees perform a complex dance which indicates to the others where they got their nectar in terms of direction and distance, and how good a source it is.

When they return to the hive, bees ingest and regurgitate the nectar several times before it is stored in the hexagonal honeycomb. The bees in the hive fan their wings to create a draft which helps evaporate the nectar and turn it into honey. The final product is around 80 per cent sugars — mainly glucose and fructose.

The colour and flavour of honey depends on the variety of flowers the nectar originated from. Lighter-coloured honeys are usually milder in flavour and darker honeys generally have a more robust flavour. While honey can be produced from a blend of nectars, single-source honeys are the premium products as they will have a distinct flavour, aroma and taste. In order to produce single-variety honeys, beehives are situated in areas where there is just one type of flowering plant.

Comb honey is sold in the beeswax honeycomb as the bees produced and sealed it, cut into smaller saleable portions. Generally, honey is liquefied by heating then strained or filtered to remove impurities. This can then be packed and sold as liquid honey but around 80 per cent of honey sold in New Zealand is creamed honey.

Honey can naturally crystallise or become granulated. This occurs because there honey has so much sugar (around 80 per cent) relative to the water content (less than 20 per cent). Glucose, one of the main sugars in honey, tends to precipitate out of the honey solution forming crystals.Creaming honey is a way of using the natural crystallisation process. A small amount of starter honey with very fine crystals is mixed into the liquid honey which then crystallises. The final honey has very fine crystals forming a smooth, silky, spreadable texture.

Tip: When you buy creamed honey, it is sometimes too hard to use. This is because most of the crystallising has happened after the jar was filled and the honey has set hard. You can, however, microwave the jar (for about 30 seconds on high for 500g) and honey will soften and stay soft.

All honey contains hydrogen peroxide, an antibacterial agent, but in addition to this there is a unique antibacterial component in honey from Leptospermum scoparium (manuka), commonly known as UMF. Manuka honey with the UMF factor on its packaging has been tested for its antibacterial activity. Ratings of UMF10 or higher are used in wound treatments.

Honey is on the NEEDN’T list recently published by Otago University: this is a list of energy-dense foods offering little nutrition and best avoided by obese people. For those who find it difficult to use honey in moderation, not using it may be the best option. For the rest of us, it’s a delicious sweet treat which is mainly made up of the sugars glucose and fructose, and it is actually sweeter than table sugar.

One tablespoon of honey provides around 280kJ, which is similar to one tablespoon of peanut butter or one-and-a-half tablespoons of jam. Generally, honey has a low to moderate GI, but this varies. Honey contains no fat and less than one per cent protein with trace amounts of minerals.

Laboratory trials suggest honey may have prebiotic action, that is, it may promote the growth of ‘good bacteria’ in the gut and it may be effective in the treatment of oral infections. Using honey with high antibacterial activity lowers the risk of dental caries but honeys can vary as much as one-hundred fold in anti-bacterial activity.

Honey bees are important to our economy

Every year over one-third of the beehives in the country are moved and leased to farmers and orchardists to pollinate their crops and clover. Healthy bee populations are so important to the productivity of New Zealand agriculture that Federated Farmers have a Bee Industry Group whose goal is to promote bee welfare. According to the National Beekeepers Association, New Zealand’s dependence on horticulture and agriculture means we may be more dependent on pollination from the honey bee than any other nation on earth.