How do they make canned food? 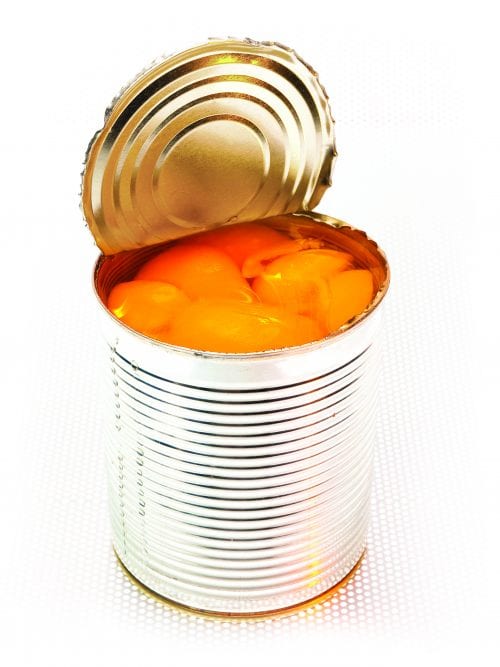 Frenchman Nicholas Appert is credited as the father of modern-day canning, although his experiments in the early 1800s started with sealing and cooking food in glass jars. How canning or bottling actually preserved food was not understood until 1861 when Louis Pasteur showed that micro-organisms were the main causes of food spoilage.

Tin and wrought-iron canisters — or cans as we now call them — were quickly recognised as a cheaper and less fragile material than glass. Today, cans are most commonly made from tin-coated lacquered steel.

How do they make canned food?

How does canning preserve food?

Initial preparation varies depending on the food being canned. Vegetables and fruit may be peeled and chopped or just washed whole. Many vegetables are first blanched at a temperature just below boiling point to destroy enzymes that could discolour the food or give it an off flavour.

Cans are usually filled with the food in a continuous production line. Depending on the food, the can may be topped up with juice, syrup, sauce or brine, leaving a small headspace to allow for expansion. The lid is sealed onto the can and the contents are cooked.

Generally, manufacturers prefer to use a lower temperature and shorter processing time to keep the texture and eating quality of the food, so a lot of work has been done to determine optimum conditions for the canning of different foods. The cooking temperature required varies with the acidity of the food being canned.

As with any form of processing, there are some nutrient losses during the canning of foods. Vitamin C and thiamin (vitamin B1) are heat sensitive and canning has been shown to destroy a varying amount of these vitamins in fruits and vegetables. The B vitamins are water-soluble and a varying proportion of these can be dissolved into the canning liquid, which we often don’t use when we open the can.

Once canned, the remaining vitamins are well retained during storage as the can prevents oxygen from reaching the food, which protects the vitamins from destruction through oxidation. How a canned food compares nutritionally to fresh or frozen food depends on the individual food, and also how long it has been stored for.

While it is legal for supermarkets to sell cans that are dented and the food inside may be just fine, it’s a good idea to avoid buying dented cans, especially if we are likely to keep the can for some time. Unless the can is perforated, punctured or the seals are damaged, the contents of the can are probably OK, but we can’t really know.

If cans at home have rust, bulging or dents, it’s best to dispose of them and not eat the food inside. Rust can eat away at the can and create holes that can let in air and cause food spoilage. A bulging can is caused by gas given off as bacteria feeds on the food product, and is a sure sign that the food inside is spoiled. Any form of structural damage to the can, such as a dent, may have damaged the inner lining of the can, allowing bacteria and air to enter and spoil the food.

When you open a can, if the food has any foul odours or off colours, don’t eat it. Foods with an unusual smell should not even be tasted.

Never keep food in an opened can. Tin and iron can dissolve into the food, which spoils the flavour. It’s recommended we either eat the food immediately or remove leftover food from the can and store it in another container. This can be kept in the fridge for up to two days.

How long can we keep cans?

Food that’s been canned and stored correctly can remain edible for many years. In 1958, a plum pudding canned in 1900 was opened and the contents were in excellent condition. Two cans of meat produced in 1823 and 1849 were opened at the same time, and declared to be free of bacterial spoilage, although the fat had hydrolised making them edible in theory only.

Cans with a shelf-life longer than two years are not required to have a date mark. However, all cans are required to have an indelible lot code. This code helps the manufacturer identify which production line the can came from and when it was made. Although age may not affect the safety of a canned food, it might affect the quality.

As a general rule, it’s a good idea to rotate cans by placing new stock at the back of the cupboard so old products are used first.

Cans are ideally stored in cool, dry conditions. High temperatures can increase the chance of spoilage and damp conditions may corrode cans or metal lids, causing leakage so the food will spoil.