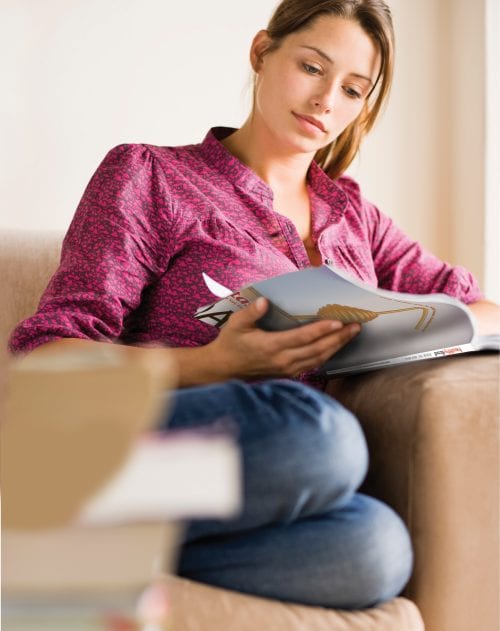 In 100 issues of Healthy Food Guide we’ve printed 10,000 pages, 2398 recipes and countless pieces of advice on healthy eating. Here are some of the things we’ve learnt, and some of the changes that have happened, along the way.

We need more of some things (than we used to)…

And less of others…

In 2009, the World Cancer Research Fund put out its recommendation to eat little if any processed meat such as ham, bacon and salami, due to its links with colorectal cancer in particular. Since then, we’ve cut the processed meat in Healthy Food Guide recipes to a minimum.

Fad diets and nutritional theories come and go but one thing you won’t find any disagreement on between nutrition experts of every stripe is that colourful vegetables (which, by the way, includes white and brown) are super-important. We can’t eat too many of these! Since early 2011, we’ve worked our recipe writers even harder, and made sure the majority of our recipes feature at least two serves of vegetables per person, frequently more!

We first ran a ‘food myths busted’ story in April 2007. Among the myths we busted then: eating no carbs after 5pm will help weight-loss (false); microwaving food is dangerous (false); a shot of wheatgrass is the equivalent of eating two kilos of green veges (also false). Myths that persist, despite all evidence, and that we wish would go away: cellulite is caused by ‘toxins’ and a bad diet; raw veges are better than cooked veges (we say both are great); margarine is one molecule away from plastic (we’ve seen this piece of nutritional nonsense printed in a magazine this year).

Since 2005… despite our best efforts — and the weight lost by lots of Healthy Food Guide readers who follow our recipes — Kiwis overall have got fatter! In 2005 around 21 per cent of us were obese. Now, that figure has jumped to around 28 per cent — that’s one million of us.

In 2005 when Healthy Food Guide started, carbohydrates were the nutritional ‘baddies’; the Atkins and South Beach Diets were in full swing. Our January 2006 story titled ‘Carbohydrates: why you need more!’ struck a chord of relief with many readers. Since then we’ve seen diet trends come and go but one thing has stayed the same in the world of diets: there’s always a food or a group of foods that fad diets want us to avoid. Whether it’s carbs, wheat, dairy, sugar, grains, oils or meat, we say everything in moderation. There’s no need to give up anything to be healthy.

The growth of gluten free

In 2005 gluten-free eating was a pretty marginal area —people didn’t even really know what gluten was (we explained it in our October 2005 issue). In eight years, the number of products available to gluten-free eaters has exploded, and understanding of gluten sensitivity in the scientific community has developed, too. Diagnosis of coeliac disease is now straightforward via an initial blood test, leading to more people being diagnosed, often later in life. Still, Coeliac NZ estimates one in 100 Kiwis has the disease, with four out of five not realising they have it (14 per cent of our readers have a gluten-free eater in their household).

Our recipes have become healthier

Healthy Food Guide recipes have always been pretty healthy but over the years we’ve tightened up on our recipe criteria, making them higher in fibre, lower in salt and more diabetes-friendly. We’ve also added vege serves, which means most recipes have at least two servings of veges per person.

We’ve had a change of governments during the past eight years. When the National government came in in 2008 it removed the requirement for only healthy food to be available in our schools, and it dismantled programmes aimed at improving nutrition in young people such as HEHA (Healthy Eating, Healthy Action). To the dismay of health researchers and educators, we currently have no national strategy to cope with the growing (pun intended) problem of obesity and its related health issues. Or, for that matter, to help Kiwis eat well to prevent disease and stay well.

There has been a huge array of products touted as ‘superfoods’ during the past eight years. In 2005 we ran something on acai berries, which we had never heard of before then. Now they’re common in everything from cereal to yoghurt. In 2006 we proclaimed oats ‘nature’s super-food’ and we have no reason to dispute that now. Grains such as quinoa and buckwheat are welcome ingredient additions to our recipe repertoire. Chia seeds with their high-fibre content are making their way into all sorts of products. Others which we think are more of a fad include coconut oil, maqui berry, chlorella, activated nuts and raw cacao. We prefer to think of whole foods that are readily accessible as super-foods: salmon, broccoli, berries, oats and tomatoes.

Label reading is no easier

In 2007 we lamented the lack of country-of-origin labelling on foods in New Zealand so we could know where our food ingredients come from. This hasn’t changed: although Australia has introduced this law, New Zealand has not. We do have new rules, though, about marketing claims on packaged foods: manufacturers will have to base claims like ‘low fat’ or ‘high calcium’ on specific criteria. This is good… but reading nutrition panels is still hard work! The advice we’ve always given still applies: compare the ‘per 100g’ columns, not the serving sizes.

In 2005 we were unaware of Fermentable Oligosaccharides, Disaccharides, Monosaccharides and Polyols, more simply known as FODMAPs, and we first discussed the topic as ‘emerging research’ in February 2009. While there is still much to learn about FODMAPs the knowledge we have so far is helping many people, in particular people with irritable bowel syndrome (IBS). Reducing the FODMAPs in their diets has for many meant fewer of the symptoms that were extremely unpleasant and disruptive to their daily lives.

Gut health, the microbiota and its apparent effect on everything!

We’ve long known that trillions of microbes inhabit our gut, but their real importance and effect on our health is just starting to be uncovered. Differences in our microbiota (the group of microorganisms we host) can directly affect disease and the composition of our microbiota varies with our physiological state. Our diets have a large impact on our microbiota, as do antibiotics and our microbial environment from when we are born. The big question is what can do to enhance our health through the microbiota? Expect to hear more about this in our next 100 issues.

There is so much more research on the ’sunshine’ vitamin and it’s positive effects on our health, and we know getting more sun exposure is potentially lethal but scientists are still cautious about recommending we go out and take vitamin D supplements. They know from hard experience that until there is strong evidence from a large randomised controlled trial (RCT) supporting the benefits and showing no harm, they cannot assume that is the answer. The good news is there is a large RCT happening in Auckland right now. The bad news is we have to wait another couple of years for the results.

Surveying and analysing our food consumption is a huge task. During 2008-9 data was collected from 4721 adults in New Zealand updating the previous data from 1997. As a nation we reduced our intakes of total and saturated fat a little, but saturated fat intakes were still a lot higher than desirable. We increased our intakes of fruit but not vegetables, and more of us ate wholegrain bread. These surveys also monitor our intakes by age, gender and ethnicity for a wide range of vitamins and minerals. For example, we know that most of us don’t get enough calcium and while we get more selenium than in 1997, many of us still don’t get enough.

Jenny Reid, Ministry for Primary Industries, member of the HFG editorial advisory board

“For the great majority of the population the ‘nutrition environment’ has not improved [in the last eight years] at all. The widespread availability, relatively low cost and promotion of poor food choices has increased and not surprisingly so has the epidemic of obesity and its comorbidities, especially type 2 diabetes. Unless there is appropriate action on the part of those who determine policy, and that of course includes government, the situation will continue. Having said that I am an eternal optimist and sooner or later the tide will turn. Healthy Food Guide is certainly doing what it can. Many congratulations on 100 issues.”

“One of the trends I have noticed over the years is the increase in the number of specially-formulated foods such as gluten free and other specialty products on the market. This has been great news for those with special nutritional needs but how far they will go in addressing some of the bigger health problems we are facing is yet to be seen. Keep up the good work [Healthy Food Guide] in spreading the healthy food message.”

“My positive event — a new café has opened across the road from work, which proudly boasts using recipes from Healthy Food Guide! The standard of my lunches has improved enormously…”

“I feel Eeyore-ish about the future as we seem to be making so little progress on the really big stuff that will make a difference to the whole population. Healthy Food Guide is doing an excellent job of making healthy eating seem easy, interesting and affordable for the families who choose to give healthier eating a go. However, in the eight years that Healthy Food Guide has grown from strength to strength, most of the community programmes which were working to improve nutrition and increase physical activity in the whole population have disappeared as there is no longer any funding for them. Public health nutrition and physical activity funding has all but disappeared. The policies that would change the environment so healthier choices would be the default option for those who have not made their own decision to adopt a healthy lifestyle are not even talked about any more and the obesity and diabetes rates continue to rise. I keep expecting the consequences of so many people with diabetes to scare the government into action but nutrition remains off its agenda.”