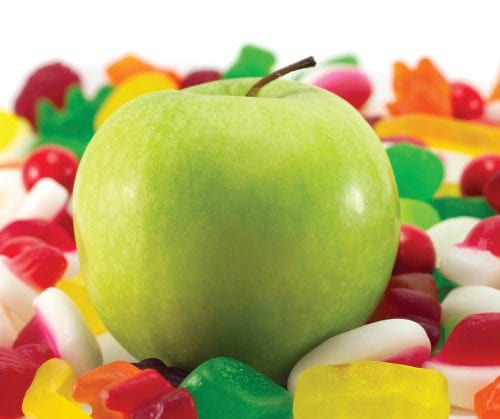 There are many myths and misconceptions surrounding diabetes. So what’s really true? Nutritionist Dr Kate Marsh separates the facts from the fiction.

Every day around 50 more New Zealanders are diagnosed with diabetes, according to Diabetes New Zealand. So chances are, you either know someone with diabetes or perhaps you have diabetes yourself. Already, around 200,000 Kiwis have the condition and for every person diagnosed with type 2 diabetes, there is another who remains undiagnosed. So it’s time to sort through the misconceptions. Here we look at some of the most common beliefs and give you the facts about diabetes and its management.

It’s the interaction between our genes and our lifestyle that influences the development of type 2 diabetes. Those who are genetically at risk don’t fare well with our Western lifestyle.

Type 1 diabetes has a very different underlying cause and weight doesn’t play a part — in fact, most people with type 1 lose weight before being diagnosed due to a lack of insulin (see What is insulin, below).

Myth: Diabetes is not that serious

Unfortunately, not true. With numbers set to soar over the next few decades, diabetes is something we should all be taking seriously. The sad fact is diabetes, particularly when it is not well managed, can lead to significant health problems including heart, kidney, eye and blood vessel disease. The good news is, with the right management, the risk of these complications is significantly reduced.

We also know that up to 60 per cent of cases of type 2 diabetes can be prevented through lifestyle changes. With early diagnosis and our current treatments, many people with diabetes live a life free from complications.

Q. Do I need to give up my favourite foods?

No. Lifestyle habits, including a healthy diet, do play a key part in the management of diabetes. But there’s no special ‘diabetic diet’.

A person with diabetes should be aiming to eat a healthy diet, just like the rest of us — and this can still include their favourite foods. There are some foods (for example, cakes, pastries, biscuits, chips, lollies, soft drinks and fried fast foods) that are best kept as once-in-a-while treats (in small portions) rather than everyday choices.

The timing and quantity of foods become more important, particularly for those taking medication or insulin, because the aim is to keep blood sugar levels as stable as possible. For someone with type 2 diabetes who is overweight, a healthy eating plan should also aim to achieve gradual weight-loss. The focus for type 1 diabetes is more about matching insulin dose to the food you eat.

Insulin is a hormone made in the body by cells in the pancreas. When we eat carbohydrates, they are digested into glucose (the simplest form of sugar) which is absorbed into the bloodstream. Insulin is released when glucose enters the bloodstream and helps to transport it from our blood into our muscles and cells where it’s used for energy. Without insulin, we get a build-up of glucose in the blood (high blood sugar levels) as it’s not able to be used for energy.

Q. Is it true people with diabetes need to snack in between meals?

Not always. For someone who is not taking medication, snacks are not a necessity, although spreading food intake over the day can often help with managing blood glucose levels. Those who are taking insulin and diabetes medication, which can cause low blood sugar levels (hypos), may need to snack between meals to prevent them going too low, but this will vary according to the type of medication and insulin they are taking and when they take it.

Myth: Too much sugar causes diabetes

Wrong. There is no evidence sugar itself causes diabetes. While diabetes does mean having too much sugar in the bloodstream, the relationship isn’t that simple. Type 1 diabetes occurs as a result of the body’s immune system attacking its own insulin-producing cells, which has nothing to do with eating sugar. And, in type 2 diabetes, the hormone insulin is unable to work properly to get glucose (sugar) from the bloodstream into muscles and cells. This is worsened by carrying extra weight, being inactive and eating lots of saturated fat. Sugar, per se, doesn’t cause insulin resistance — although obviously when eaten in excess it can contribute to weight gain, which then increases the risk.

Fact: There’s no such thing as ‘mild’ diabetes

Some people with type 2 diabetes who are not taking medication think of their diabetes as ‘mild’ or less serious, but unfortunately this is not really the case. The reality is, if blood sugar levels aren’t kept on track and the body is buffeted by persistently high levels, then complications develop.

We also know type 2 diabetes is a progressive illness and so, over time, people usually progress to needing tablets and then insulin.

Taking diabetes seriously from the start, including putting the right lifestyle changes in place and adding medication when needed, will help to slow the progression and reduce the chances of developing complications.

This occurs when the body’s immune system destroys the insulin-producing cells in the pancreas. Without any insulin-producing cells, the person with type 1 must either get insulin through injections or an insulin pump. They also need to balance food, activity and insulin to keep blood sugar levels as close to normal as possible. Type 1 represents around 10 per cent of all cases of diabetes and is more commonly diagnosed in children and young adults, but can occur at any age.

This occurs when the body’s insulin is unable to work properly or when the body can’t produce enough insulin to maintain normal blood sugar levels. The risk of developing type 2 is higher in people who are overweight and inactive, and diet and exercise are the first line of treatment, but most people with type 2 diabetes will need oral medications and possibly insulin over time. Type 2 makes up about 90 per cent of all people with diabetes. It is more often diagnosed in older adults, and unfortunately it is becoming increasingly common in children.

What you need to know about type 2

Type 2 diabetes starts with a problem called insulin resistance. This is where the body’s insulin is unable to work properly, meaning glucose (sugar) doesn’t get absorbed into cells where it is needed for energy, but stays in the blood. So, eventually blood sugar levels rise, developing into pre-diabetes, and then into type 2 diabetes.

For most people this is a gradual progression over many years, but unfortunately it is often not diagnosed until the later stages when blood sugar levels have already been elevated for some time.

The main problem with diabetes is the damage to blood vessels that occurs when your blood sugar levels remain high for long periods of time. This can lead to heart disease, kidney disease, eye damage and circulation problems.

With lifestyle changes and the addition of medication when needed, the risk of developing these complications can be avoided or significantly reduced. Early diagnosis and maintaining good control of blood sugar levels, cholesterol and blood pressure is the key.

How to tell if you’re at risk

It is possible to have type 2 diabetes without symptoms so awareness of risk factors is key to early diagnosis. Symptoms of diabetes can include extreme thirst, frequent urination, blurred vision and fatigue.

If you have a family history of diabetes, you are carrying extra weight around your middle or you have high cholesterol and blood pressure, you’re at higher risk and should be tested regularly. Women who have polycystic ovary syndrome (PCOS) or who have had gestational diabetes or large babies are also at greater risk.

Risk of type 2 diabetes also increases as we age and it is higher in Maori, Pacific Island and Asian people. If you’re worried, speak with your GP who can organise a simple blood glucose test.

Taking action early significantly reduces your risk of developing diabetes. Research has shown people with pre-diabetes who make changes to their diet, exercise and weight can reduce their risk by almost 60 per cent.