How to choose chips and crisps 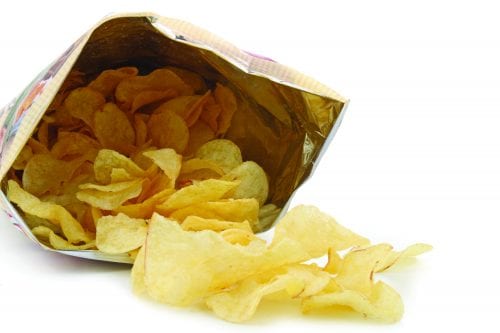 We all know chips aren’t a health food. In fact, the traditional high saturated fat, high salt versions could be described as a heart-stopping combo!

There are, however, healthier options, and we don’t need to compromise on taste by choosing them. HFG senior nutritionist Rose Carr explains.

Traditionally potato chips used to be about one-third total fat and 15 per cent (or more) saturated fat. It’s the saturated fat that’s out to kill us: too much can harden our arteries and lead to cardiovascular disease (CVD). Despite better knowledge and some progress over many years, CVD it is still a huge killer in New Zealand and our intakes of saturated fat are still very high.

Higher intakes of sodium (which is largely from salt) are associated with high blood pressure, another risk factor for heart disease. The amount of sodium in chips varies hugely, from around 100mg to more than 1100mg per 100g.

Most of the sodium in our diets comes from processed foods and the sodium level in specific foods is something our taste buds become accustomed to. If we choose lower-sodium products all the time, we become accustomed to a less salty taste in our diet and we don’t miss it. If you cut the amount of sodium in your diet it may take a couple of weeks to get used to it, but it’s worth doing.

Most chips are energy-dense thanks largely to the amount of fat they contain. We all need fat in our diets but we also know that too much will just add to the waistline.

With chips and crisps, it is really important to look at the nutrition information panel rather than believe the hype: it’s all too easy to misinterpret the words that shout at us on the packaging. Note:

We strongly recommend you compare products before you buy. If you only look at two things, compare the saturated fat and the sodium.