How to choose creamy dressings 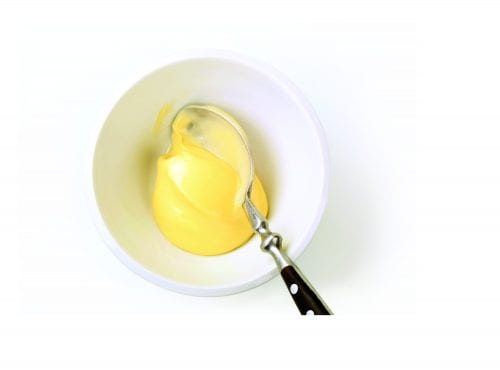 Mayonnaise and other creamy dressings can be a trap for anyone watching their weight — just an extra dollop could add 500kJ or more to your day. HFG senior nutritionist Rose Carr shows us how to choose wisely.

Traditional creamy mayonnaise or aioli can be 70-80 per cent fat. In itself that’s not the problem, as most are high in good fats that we need in our diets. It has been shown that just a small amount of fat from a dressing can help to absorb fat-soluble nutrients in a salad. Some dressings, however, are high in saturated fats which are not good for us, so if you choose a high-fat product, aim for one with 8g or less saturated fat per 100ml. Lower-fat dressings will be lower in energy (kilojoules).

As the amount of fat is reduced in creamy dressings often the amount of sugar is increased as the sugar now provides the body and flavour. There’s nothing wrong with adding a little sugar to a dressing if it means we will eat more salad. However, given concerns we are becoming accustomed to lots of foods being sweetened, it may be a good idea to limit the amount of sugars in a dressing we use regularly. Aim to use products with 20g sugars or less per 100ml. Most products have much less sugar than this.

The recommended upper limit for sodium is 2300mg per day, but the ideal amount for good health is just 1600mg each day. While around 250mg in a rounded tablespoon (equivalent to 1250mg per 100ml) may not sound like much, compared to those daily amounts, the sodium we consume from manufactured foods can add up very quickly. On average, we consume 50 per cent more than the recommended upper limit for sodium and most of that is from manufactured foods.

If you have high blood pressure or you have been told to lower your sodium intake, make sure you choose dressings with 1000mg or less per 100ml — the lower the better. Lower sodium intake is better for all of us so even though we may use a higher-sodium product occasionally, using lower-sodium versions for everyday use is strongly recommended.

The Original version of Heinz [Seriously] Good Mayonnaise has 2720kJ per 100ml and a 20ml serve (a rounded tablespoon) has 544kJ. So while it has lots of good fats and is low in saturated fat (5.1g per 100ml) an extra dollop or two can make a big difference to the amount of energy. For those who need to watch their energy intake there are lots of lower-energy options — including a lite version of the Heinz [Seriously] Good Mayonnaise — with around half the kilojoules, some with even less.

Unless we are trying to put on weight, even when we are choosing dressings lower in kilojoules than their high-fat counterparts, it pays to be aware of the kilojoules we could be adding. There is still a big difference in the amount of energy in these dressings. For example, if you’re using Edmonds Ranch dressing, a 20g serve (a rounded tablespoon) has 282kJ. So if you have two rounded tablespoons, that’s 564kJ added to your sandwich or salad. Three? 846kJ. At the other end of the scale, if you’re using Pams Lite Mayonnaise, three 20g serves would only add 240kJ.