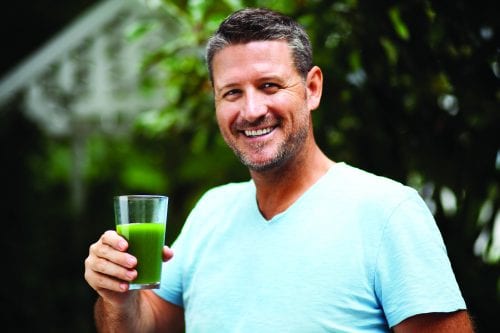 In part two of our men’s health special, we meet another HFG reader who’s taken his health into his own hands, and we get some advice from well-known men.

Secondary school teacher Steve Russell (57) has lost 17 kilos since February 2012, and he has maintained a stable weight of between 68 and 75 kilos. His wife, too, joined him on his weight-loss journey and lost 27 kilos — going from a size 18 down to a size 14. Here’s how they did it.

What prompted you to take a look at what you ate and change your approach to eating?

Health concerns. I had high blood pressure and gastric reflux. A doctor suggested that reducing my weight would lower my blood pressure. It seemed I needed permanent lifestyle changes or I could expect to have health problems.

My wife wanted to lose weight as well, and I wanted to support her; doing it together was going to be supportive and encouraging — a greater chance of success for us both.

What changes did you make to get started?

I decided to use vegetables and fruit as substitutes for my usual snacks. To my surprise I found these satisfied my hunger and the weight came off at more than one kilo a week. My wife had identified bread as a problem so we substituted crackers. I identified cheese which was replaced with cottage cheese. Alcohol was limited to social occasions and not with meals. Spreads such as honey, jam and peanut butter were banned, as were high-sugar pickles.

The biggest ‘secret’? Eating unprocessed foods. Processed food will have you addicted to its taste burst. Exercise was slightly increased by an extra half-hour walk each week (from three sessions to four).

What were the challenges of sticking to the changes?

Biscuits were rationed but I couldn’t stick at two so we eventually banned those and we don’t miss them now.

It was challenging at parties when fatty, sugar-rich foods were everywhere but we found ‘one of everything’ was a useful limiting tool and we aimed to eat more of the healthy low-fat, low-sugar, low-salt foods.

I tried cutting out processed muesli and made my own based on half a cup of oats with fruit and two tablespoons of yoghurt. I found this helped dramatically by making me feel full for longer.

The final challenge was having to reduce portion sizes as I was losing weight because I didn’t need as much. But past behaviour had me expecting a large-sized meal. Getting my head around that was difficult.

What are the benefits you notice from losing weight?

I have more energy. I can walk up hills without puffing, for example. I have dramatically lowered my blood pressure to 108/69. My acid reflux has ceased altogether, my snoring has stopped (a surprising bonus), and I sleep better. Clothes fit, too. Other lifestyle changes? I feel better, I will live longer and I’m better in bed. And watching my wife do it with me and seeing her take ‘control’ and gain self esteem? Priceless.

What’s your advice for other men who may be at a crossroads, as you were?

How to get active

Tips for men from Buck Shelford and Dr Grant Schofield from BUCK UP.

Choose where you live carefully

Living in a place where the density is higher, the streets are well connected and there are nearby places to walk to has a big effect on how fit and active you are. Our research in Auckland, Wellington and Christchurch shows people who live in places such as Takapuna and Devonport in Auckland, or Karore and Newtown in Wellington, are about 50 minutes more active a week just because they make local journeys on foot, rather than by vehicle. I’m not suggesting that you should just give up on exercise if you live in a car-dependent neighbourhood. It’s simply that if you live in a more walkable neighbourhood, you drive less and interact with people more.

If you can live within a few kilometres of work, then great. And if you can walk or cycle that distance then you will be more active and much healthier. It’s also a great mental break between home and work.

Stand if possible, or at least don’t sit

If you are in a job where you sit for eight hours a day you are exposing yourself to extra health risks, even if you exercise. The incidental movement in active jobs, and in jobs where you don’t sit, makes a big difference to your fitness in the long run. Sitting also shuts down blood flow to the brain, so you will most probably think better, and solve problems more easily, on your feet.

It’s not just exercise that is good for you. In fact, some people who go to the gym overcompensate and use less energy that day because they accumulate less steps elsewhere. There are dozens of opportunities (yep: opportunities, not hassles) to get a bit more movement, make a choice to be responsible for your health and take those opportunities. So walking to the dairy rather than taking the car, or getting off the bus a stop early are great ways to get more movement into your day.

Vigorous activity is really good for you, especially if it gets you fit

Getting fit is the holy grail of health. It is the single best thing you can do for yourself. If the benefits of exercise came in a pill, it would be the best pill ever invented, improving the brain and body in dozens of different ways, yet with no negative side-effects. If you care about your health, then getting fit is the first thing you should do about it.

Remember, though, that willpower is overrated, and a high level of exercise requires a high level of effort in the long term. The best results are achieved when you make a commitment (such as pay your entry fee for the marathon), and enlist some support (join a club, hire a trainer, or train with friends).

A radical solution to a radical problem

At age 41, Australian Joe Cross was a highly successful businessman, independently wealthy and well-travelled. But he was also obese and suffered from an excruciating autoimmune disorder, for which he was forced to take strong steroid drugs. In his own words, Joe was ‘fat, sick and nearly dead’.

So he decided on an extreme course of action: a sixty day ‘reboot’ juice fast, during which he consumed only fresh fruit and vegetable juices. Joe’s fast is documented in the film Fat, Sick & Nearly Dead.

A juice fast is a drastic step to take, and not something we would typically recommend as a weight-loss solution. But it worked for Joe.

“I was overweight, in poor health, on medication pretty much at the end of my rope,” Joe says. “My experience with juicing reset my palate, got me craving vegetables and fruits every day, got the excess weight off and brought my autoimmune disease completely under control.

“My diet is almost completely different from the ‘old days’. I eat mostly plant food with some lean protein and whole grains from time to time, and very rarely will I have the processed food that used to make up 95 per cent of my diet. However, I also believe that life is meant to be enjoyed. So I always tell people that if every now and then you have an ice cream or a meat pie when you’re watching the game, well that’s okay. As long as you are getting most of your nutrition from whole foods, plants and unprocessed foods, you can afford to enjoy those experiences and still maintain your health and energy.”

Joe’s message for Kiwi blokes is to take control of their health for themselves.

“I’m a bloke who lived large for the first 40 years of my life. I worked like mad, enjoyed excess in almost every form, and really took for granted that the vitality of my youth would last forever. But the reality is that things change over time, you can’t treat your body like garbage and expect it to remain strong, trim and in fighting form. The amazing thing I’ve learned is how simple it is to repair that damage by manning up and making some smart changes. And we all know that to be successful, whether in business, on the pitch, or as a dad and husband, you’ve got to stay healthy.”

For more information, go to www.rebootwithjoe.com

See also Part 1 of our Man up! feature.