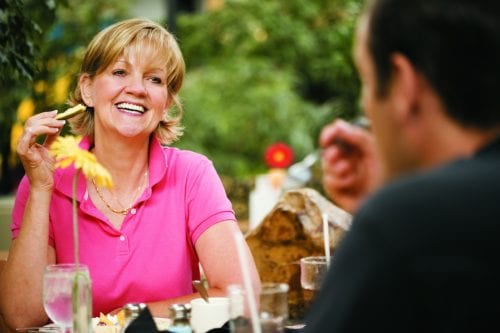 In an extract from his book Weight Loss for Food Lovers, Dr George Blair-West explains his approach to lasting weight-loss.

This is not really a diet in the traditional sense. In essence it is built around the research into Restraint Theory – remember the ‘What the Hell’ effect and the ‘Last Supper’ effect?

Restraint Theory (RT) tells us that if we have to give up too many good foods, ultimately we will rebel, say ‘What the Hell’, and break our diet. Moreover, we tend to do this with great, devilish delight as we proceed to overeat and undo all the good work we have done.

The moment you start feeling deprived, you are at risk. We have a deep emotional attachment to certain foods – particularly celebratory or ‘party’ foods.

I applied this to the overweight clients I was working with and found that only a minority of the fattening foods they ate were foods they were particularly attached to – foods that would be a ‘high sacrifice’ to give up. So my approach changed as I realised that it was only the ‘high sacrifice’ foods that would trigger the rebound over-eating dictated by Restraint Theory.

Taking many fattening foods that people ate out of their diet did not bother them at all. As long as they did not feel deprived they did well.

The trick was to take the time to identify which foods would trigger rebound over-eating if they were taken away and which ones wouldn’t – and thus the Low Sacrifice approach to weight-loss was born.

We are going to put all you like to eat, or want to eat, in the three columns in this worksheet.

Now think about the fattening foods you eat and apply the following test with each one as it comes to mind: If I could never eat that food ever again, how much would that bother me? Since your weight will be a potential problem forever, you need to ask: ‘How big a sacrifice would it be to give them up forever?’ Try closing your eyes and just notice your emotional reaction to this question with each food.

Identifying your LSFs and HSFs

The point I want to make here is that low sacrifice foods (LSFs) are those that you do not have a strong emotional attachment to: they are foods you can live without and it is no big deal. I am continually surprised at just how often people eat fattening foods they are not particularly attached to. Often they eat them out of habit, often because they are usually found in the immediate vicinity of food they really love (people eat the burger because it comes with the shake or the fries they love). Sometimes they eat them out of ignorance, not knowing just how fattening certain foods are.

From now on, we are going to apply the test, as we would with the people we love: Is this food worth dying for? In this day and age, it is not often we are put in the position of risking our lives for someone we love, but with fattening, artery-clogging food you are doing it every day. The foods worth dying younger for are your high sacrifice foods. If we can then eat them in smaller amounts, less often, we may just cheat death.

So this means we might go through the drive-through and just get the fries or the shake and take it home to eat with a healthier meal.

The foods in the third column [of the workbook task sheet] are going to fill the gap created by the LSFs you are going to stop eating. Some foods you like/love/flirt with will not be particularly fattening foods. Examples are: a good steak, avocado, any fruit and most seafood.

Identifying your high sacrifice foods is easy – just think about your forbidden or favourite foods. These foods would be a big sacrifice for you to give up forever. The prospect of life without them does not bear thinking about!

High sacrifice foods (HSFs) are these foods we have grown to love over the years. Remember, eating is the most fun we can have in public and one of the few pleasures we can experience several times a day without bothering anyone else or behaving illegally. So don’t feel guilty about these foods you love – embrace them. The time to feel guilty about them is past! What we have to learn to do is eat them in a way that does not cause us a health problem, but which allows the pleasure that they offer.

This brings us to the Golden Rule: There are no foods that are forbidden. There are only foods we need to manage better.

Allowing – the antidote to craving

So, the LSF list is now off the menu for you, but the HSF list is definitely ‘in’. ‘Allowing’ might seem like a simple and obvious concept, but after years of guilty struggle with trying to avoid their forbidden foods, some people really struggle with allowing themselves their HSFs in a managed way. It took one of my male clients, a very capable executive, three weeks and two visits just to convince his mind that he could allow himself a chocolate frog for morning tea (the very same that he would happily binge on at other times).

When I get people to list the emotions they have as they begin to eat different foods, I consistently find one emotion with eating HSFs such as chocolate, and foods like it – guilt! Worse, when I ask them how much savoring happened at the time, they say words like ‘Are you kidding? Because I shouldn’t be eating it, I shovel it down so fast it doesn’t touch the sides!’

For those of my patients who love chocolate, I prescribe it for morning tea for all the reasons I do it. Some people are really worried that if they start, they won’t stop. This is part of the deprivation-binge cycle. Take out the deprivation and the urge that drives the binge disappears. It may be there initially, when we start to ‘allow’, because our brain is not convinced yet. But, over time, usually no more than a couple of weeks, the drive to binge lessens. On top of this, people rarely binge or over-eat food in the morning. Unless you have the disorder Bulimia Nervosa, over-eating is a ‘pm’ pursuit.

A strange thing happens when I prescribe chocolate in the morning on a regular basis. A surprising number of my clients come back and tell me that not only did they find that they did not crave the chocolate later in the day when they were more likely to over-eat, but some days they skipped the chocolate altogether. This is where ‘allowing’ is more than just a way of avoiding the feeling of deprivation as the day progresses. It actually treats the craving for the food in the first place.

This is simply because the craving was created by disallowing. How do you get a child to want something – tell them they can’t have it!

For this reason it is important to be aware that foods will move in and out of our HSF group over time. An LSF, once we stop eating it, may become more attractive to us over time. If this happens, treat it as an HSF and add it back on your menu.

Reproduced with permission from Weight Loss for Food Lovers – understanding our minds and why we sabotage our weight loss by Dr George Blair-West.