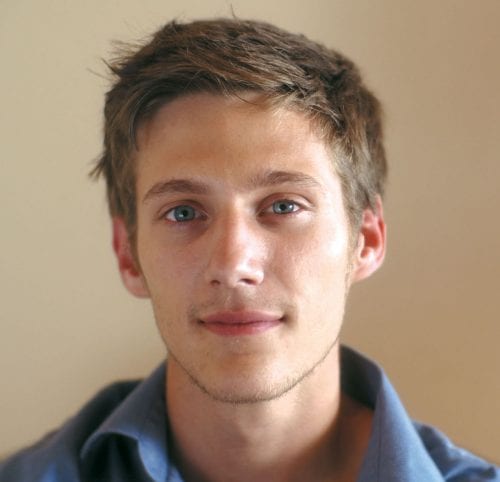 Our nutrition and exercise expert looks at a young athlete's eating and exercise habits and gives him some advice.

Graham is rugby union player who has come to New Zealand on a scholarship from his home in Scotland. He will undergo some intensive training over eight weeks with a team of experts at the Millennium Institute of Sport & Health.

Graham is currently playing for the Border Reivers Club in Scotland and is in the National Rugby Academy. He is the 2006 recipient of the John MacPhail scholarship, funding him to play a season of rugby in New Zealand.

Since being in New Zealand, Graham has eaten a good amount of fruit but doesn't usually have many vegetables. He has plenty of healthy snacks but is relying on takeaways for most of his main meals. He hasn't eaten much red meat since arriving in New Zealand. He always drinks plenty of water by keeping a bottle with him. He doesn't drink protein shakes but has in the past.

Graham presents a picture of health, including his serum ferritin (iron stores) which is important as he has not eaten much red meat since arriving in New Zealand. His BMI is over 28, which officially puts him in the overweight category. However, this is because Graham has a high muscle mass. In the case of athletes, BMI is sometimes not an appropriate measurement. His waist circumference is in the healthy range at 86.6cm and his body fat is quite low at 11.6% body fat (calculated from a skinfold test). Males in some elite sports where low body fat is important have been known to have under 5% body fat.

Graham has a great 'once in a lifetime' opportunity in coming to New Zealand. It's important he gets the most from it, not only by getting the best training and coaching but also by making sure he gets the right fuel and nutrients so he can cope with the stresses placed on his body.

Since leaving Scotland, and home comforts such as mum's good cooking, Graham has started to rely heavily on convenience foods. This potentially compromises his training and weight goals. In light of a suggested huge increase in training levels it is important we fuel him appropriately and that recovery is a focus, including nutritional recovery and adequate rest. We must get some organisation to Graham's intake. He is in an unfamiliar environment with some unfamiliar foods (and self-confessed limited cooking skills), so being organised will help ensure he gets enough of the nutrients he needs.

Exercise-wise, while some of Graham's training history is talked through, our main focus is what he is about to undertake to improve his speed and strength with high-performance coach Marlon Gevaert, who is based at the Millennium Institute of Sport & Health and is a key coach for many of New Zealand's elite sprinters. We also do not assess his VO2 max, as cardiovascular fitness is not a goal. Instead, his sprint time over 10 metres and 40 metres (both distances relevant to rugby) are assessed; his best times were 1.79 and 5.40 respectively. In Marlon's testing experience, these are average scores for a rugby player.

Breakfast. A regular breakfast including porridge, cereal or muesli with milk or yoghurt and fruit.

Morning and afternoon tea. High carbohydrate, moderate protein-containing snacks for both including muesli bars, creamed rice or yoghurt, and cutting out his morning lollies! He should pay attention to the amount he is eating for afternoon tea as it is a 'pre-training meal', however a moderate-sized portion is suggested when kicking skills training is undertaken. Fruit is also a good option.

Lunch. To be made from home half of the time, and may consist of leftovers or homemade rolls with salad; Graham is given a list of suggestions applicable to New Zealand. At least 100g of meat is recommended as well as a substantial amount of carbohydrate and also vegetables. Healthy takeaway options – such as sandwiches or rolls, kebabs or low-fat rice or pasta dishes – are also suggested.

Training sessions. Remove the sports drink from training and replace with water. Instead, we focus on the pre-exercise meal and a recovery snack is included after heavy sessions to optimise muscle repair and restoring muscle glycogen (the main fuel source for exercise). Graham opts for a small protein shake; but other options include protein- or milk-based drinks such as smoothies or flavoured milks. Alternatively, foods such as yoghurt, creamed rice or muesli and cereal bars are also suitable.

Dinner. A moderate portion of meat – approximately 200g or so – and a larger portion of carbohydrate- containing foods and vegetables. Options are suggested, but for the most part Graham will stick to a meat-and-three- vegetable approach, which is a valid choice.

"Speed and strength are very important for a good rugby player. His programme will be a big step up from what he is used to, consisting of three speed sessions per week, three weight sessions per week and kicking skills four times a week. On top of this he has two club trainings per week and a game on a weekend. When tested initially, Graham proved very strong for his age, however he needed improvement in lifting techniques and explosiveness in the gym. Therefore weightlifting exercises were the main focus in his strength programme. In his training programme, the focus was on running technique, acceleration, top speed and agility."

"The programme is full-on, but that's why I have come this far. I didn't think about nutrition all that much before – I guess I just hadn't stepped up in that area and also much of it was done for me; it is strange having to be looking after myself now. I like that some takeaway options are still included and that it is clear why I have to change. I also found the skin-fold test results really interesting and the programme Marlon has put together is coming together well and I am feeling good already."

Graham has had some amazing results and his current coach is extremely pleased with his progress. Not only has Graham managed to excel throughout the programme, he feels he has learnt a lot in the process. While initially he weighed in at 90.5kg and 11.6% body fat, a combination of hard exercise and good nutrition has him at 89kg and 10.7% body fat. This means the weight has mostly been lost through a drop in body fat and he plans to return to Scotland and work on building more muscle.

His intake of protein has stayed relatively similar to before, but it is more evenly spread out with a smaller dinner and the inclusion of a recovery snack. More protein-containing snacks throughout the day makes the protein readily available for building muscle and prevents over-eating. He also has a lower fat intake, largely controlled by his food and snack choices and because he's eating healthier takeaways. His carbohydrate intake is similar but it is more controlled, and he has exchanged his fruit juice for fresh fruit. He also has a much higher vegetable intake.

"Over eight weeks Graham improved his 10 metre time by 0.1 seconds. He didn't run faster over 40 metres, however a possible explanation for that could be that he was still training hard when he was tested and thus may still have compromised function, so after a resting period he will likely see the benefits of the training he has done here at the Millennium Institute. Overall he made great progress in speed and strength and was lifting much heavier weights by the end of the programme."

Graham reports he is feeling stronger and his coach reports he is also looking stronger. Graham also feels 'less flabby' and feels he has more definition around his arms, chest and legs. Graham reports that his nutrition intake is maintainable and a lot of the skills he has learned he will take home and use – we wish him the best of luck and hope he doesn't pass too much of this new-found knowledge on to his Scottish peers!